Another year has come and gone. How is it possible that time is moving this quickly? I feel like I did so much, yet at the same time barely did anything at all.Â I want to continue the tradition of evaluating the previous year and setting goals for the coming year.

I was absolutely able to write more this year than I did last year simply because I had 3/4 of the year back to normal. The beginning was a bit shaky while still planning a wedding, but once things settled down I was able to find a rhythm. Still, I have a long way to go to get back to where I want to be with daily blogging.

I failed here. I need and want to give you guys more in-depth commentary on what I am actually doing on a daily basis in my games — especially MMOs. This will help with the amount of content.

I think we did phenomenal here. I’ll allude to this later, but as far as coverage goes there hasn’t been a better year for the diverse spectrumÂ of coverage spanning across all platforms.

I nailed this one. 2015 was the year of console gaming for me. I played more console games than anything else, yet at the same time I still enjoyed MMOs, shooters on PC, and all sorts of games. I had a blast breaking out and trying so many games I never would have given the time of day. I can finally say I have accomplished my goal of avoiding consoles.

I get why I made this goal. Get more involved to increase immersion, feel like there’s a community, etc. Ultimately no games were there to provide me with this avenue. I think I’ll abandon this one.

I’m going to put a check next to this one because I definitely completed most games I started. I still have to finish Fallout 4, but that just came out in November and it’s a long game and not worth rushing.

The chart above shows the games I can say I actually “played” seriously, and is rather enlightening — click to enlarge. [Idea for the chart came from seeing one on TAGN] Getting married pretty much killed the first 4 months of the year for my gaming schedule, creating what looks like the dark age or drought. A huge surge happened by the end of the year and became a renaissance with more games than I could even play.

MMOs consisted of EverQuest for 5 months and WoW for about 3, making MMOs consistently present from May through December. However, in terms of volume, I played way more console games the PC games with the PS4 coming in far head of anything else.

My favorite games of 2015 included:

I introduced a new review system in 2015 that I am very happy with. The layout works great (other than some mobile issues with responsive design) and allows me to focus in more on giving you guys the details of why I like or dislike a game. Our overall review system is the same. I give a game an “Overall Fun Factor” score which acts like the typical 1-10 system. I also throw in pros and cons to help you understand why I gave a game the score I did. 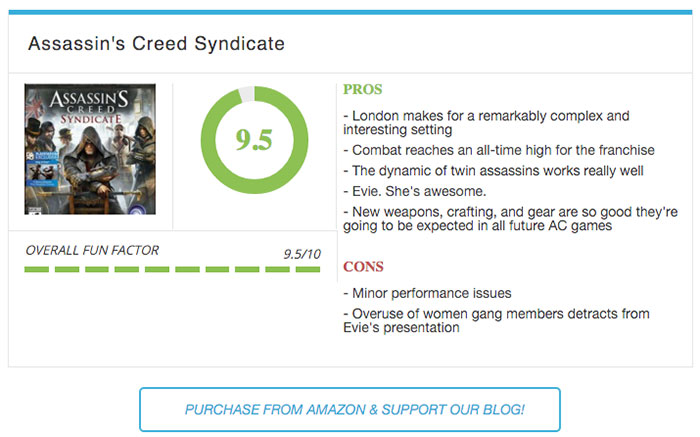 Your feedback on our reviews is always welcome. I want to continue to improve upon the system, namely how quickly we review. I’m also trying to improve providing review coverage of games we may not necessarily enjoy. You may notice our reviews tend to fall within the 7-10 range a lot. That’s not because our system is flawed like others who seem to give a 7 for the worst games on the planet and a 10 for the games slipping money under the table. Almost every single game was purchased with my own money this year, and I tend to try and avoid buying games I dislike. I’m going to work on reaching out to developers again to obtain review copies.

Ultimately, we truly play everything we review. That’s a big part of my gaming requirement: Gaming is not my job. I do not force myself to play games. Games are what I do for fun. That’s why I continue to enjoy reviewing games — ultimately I am helping others make informed decisions based on what I love.

I like setting goals rather than the predictions I used to make in the past. Goals give me a metric to measure myself against and see whether or not I am capable of achieving what I set myself to do.

Goal 3: Review more games in 2016 than any other year, and review them quicker

Goal 4: PlayÂ at least 3 MMOs (not including EverQuest

As of this moment, 2016 looks like a repeat of 2016. There will be plenty of games to play, but MMOs seem to be taking a backseat to the rest of the industry. Legion’s launch late in the year will definitely revitalize things a bit, but in general it’s going to be about the same. One thing is for sure: I won’t have a dead period in the beginning of the year and that already means gaming in 2016 is going to look a whole lot better.

Coming up Next: State of the Blog