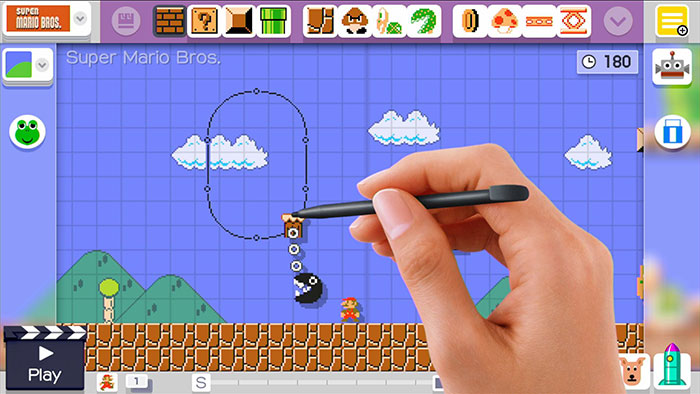 Spoilers: Super Mario Maker is so much fun! Super Mario Maker takes all of the things (well, almost all) we know and love from Mario over the last 30 years and packages it all up into what is by far the biggest and potentially never-ending Mario game ever made.

Super Mario Maker allows players to create their very own Mario levels using graphic styles, doodads, enemies, bosses, and gameplay mechanics from all of the 2D side-scrolling Mario games. In addition to making and playing your own levels, players can go to the Course World and download levels made by other players all over the world.

The creation tools are phenomenal. I can’t imagine them working much better than this in terms of functionality. The experience is so seamless and smooth that you can literally place something, click play, and test it out on the spot. There aren’t load times or transitions — it’s instantaneous. The developers wanted this experience to be smooth, and they nailed it.

Here’s where the gamepad shines and no other consoles can compete. Being able to use the stylus toÂ drag/drop and manipulate two screens is a must.

My biggest criticism of the make mode has nothing to do with what’s in the game. Everything in the game is fantastic. I’m more bummed about what wasn’t included, and hope that we’ll see it patched in soon. Here are a few things I’ve noticed that are missing:

The list is actually extensive and growing, which leads me to believe we’re either going to see DLC, or if Nintendo treats this like they did Splatoon we may see this added for free. Fingers crossed. 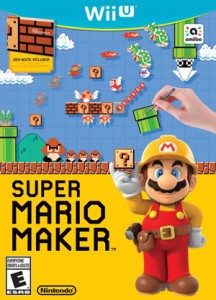 Super Mario Maker plays … well, it plays exactly like a Wii U Mario game. Combining all of the elements from various games creates a rather unique experience. Normally you don’t have the elements of a water level mixed with an airship levels. Squids with wings? The level of customization does indeed make you have to stay on your toes and never expect the level to stay true to the theme.

Additional forms of play include the 100 Mario Mode (or 10 Mario Mode, etc depending on difficulty) where you are given a set of lives (100, 10, etc) to survive a certain number of courses. These modes present random course offerings (easy mode being Nintendo made) for you to complete. The more you complete, on harder difficulty, the more rewards you’ll get. Rewards include special costumes and goodies to use in maker mode. Â I like this mode because it gives me a reason to go out and play randomized player-made courses.

Nintendo created a great interface for players to upload, download, play, share, comment, rate, etc., each other’s courses. This system integrates nicely the Miiverse, Nintendo’s internal social media’ish platform. Play a course and like it? Give it a star and comment so that others know it’s worth playing. Take screenshots are certain parts and include comments for others to see as they play a course.

Sharing a course is super easy. Simply enter the level’s code and it comes right up. For example, try entering Graev’s ‘Beneath The Temple of Time v2.5’ course: CBB2-0000-003E-300D

I have a few issues so far with this whole ‘people make courses and share it’ stuff. First, there’s a fad out there for “do nothing” courses. People get creative and come up with fun ways to basically run you through a level automatically. See my video above for an example. These are neat at first but when the top levels are all these automated play ones it’s sorta annoying. I want to play Mario, not watch Mario. I end up sorting through to find the ones that are fun.

Another fad is creating the most difficult and impossible levels you can imagine. Again, not my style. I want my levels to be well-made from a “Oh wow that’s cool!” point of view, not a “Geez you have to try this 100x just to beat it.” 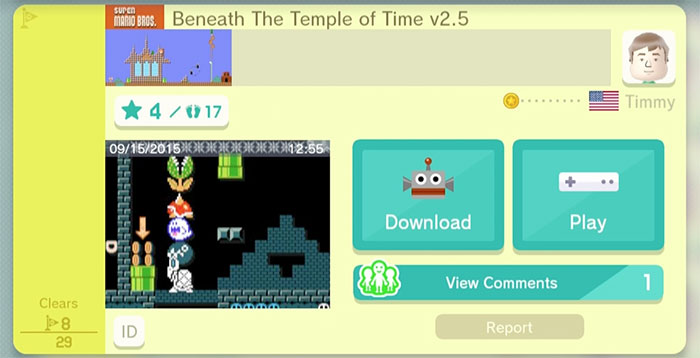 These issues are my own, and easily overlooked. I wouldn’t go anywhere near what other people are saying, which is that these levels or “crappy levels” are ruining the game. Don’t like them? Don’t play them. Star the ones you like! Find a maker you enjoy and follow them so that you can continue to play great levels they make.

Super Mario Maker is a great addition to the Wii U, and to the Mario franchise. With a little love from Nintendo in the form of updates/additions it would be perfect. I can’t wait to see how Nintendo takes this to the next level, allowing us to (fingers crossed) create the 3D platformer games like Mario Galaxy/Mario 64/Mario Sunshine…Â SuperÂ Mario Maker 2 anyone?

Super Mario Maker is without a doubt a winner. If you own a Wii U, and you don’t own SMM, then you’re doing it wrong.