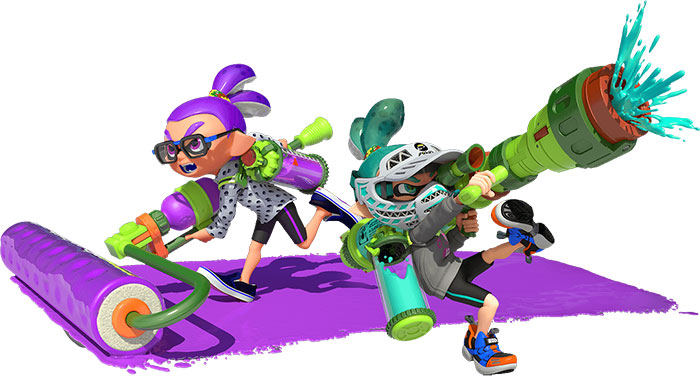 You can still “kill” or splatter your opponents by shooting them inking them up bad enough. When you die you spawn back at your starting point which takes anywhere between 10 and 15 seconds to happen. This is valuable time lost if you consider that any ink you lay down can be painted over by the enemy. The map turns into a constant tug-o-war. The key is to own the center of the map and not let the enemy sneak behind your lines. If you lose control of the map you are likely to lose.

Weapons, Combat and Playstyles
The weapons and gear in Splatoon come in three types as depicted above: (1) Main weapons, (2) Sub-weapons, and (3)Â Special weapons. The main weapons are everything from automatic machine-gun types to charge-up sniper rifles and paint rollers. Each of them brings a somewhat unique style of play and special abilities.

Sub weapons are things like bombs, detectors to see where your enemy is at, and other cool gadgets. Special weapons are more of the “uber” weapons like a bazooka or air strike.

So far I am definitely loving the run and gun style of using a rapid low damage weapon. As I get better at aiming with a controller, I am learning that when people get splattered quickly they get overwhelmed. I can just pelt them quickly, go into squid mode, and move on to the next kill. This allows me to rapidly pain the map while inking other players.

I just mentioned two specific things I want to elaborate on: Squid mode. To refill your ink tank (which powers everything you do — like ammo) you must go into squid mode and swim in your own ink. This introduces lots of complexities and tactics like having to ensure you’re always on your ink (being on the other color slows you down and prohibits squid mode) and also allows you to sneak up on other players.

Combat in Splatoon feels exactly how you’d expect shooting ink from a super-soaker, and it nails the fast and furious (almost hectic) zaniness I want in a shooter like this. 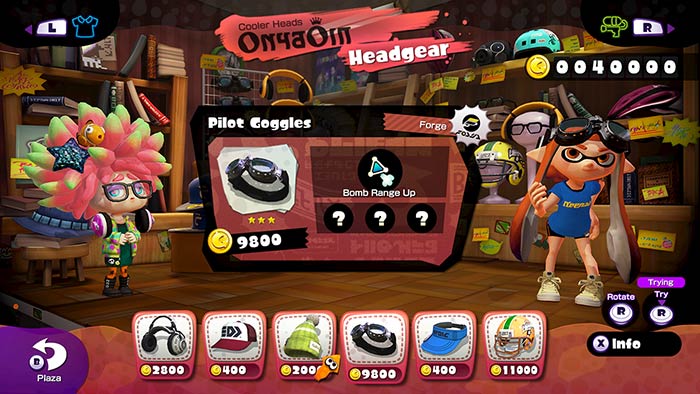 Customization and Outfits
Winning (or losing to a lesser degree) earns you coins to spend in the shops of Inkopolis. There are shops for Hats, Shoes, Shirts, and Weapons. The better the items, the more they cost. By better I mean the number of slots they have for upgrades. As you can see in the image above, the Pilot Goggles have 4 upgrade slots. The helmet might have 3, and the skicap might have two.

Upgrade slots are random on gear. That means no two pieces of gear are guaranteed to be the same. We both may have a pair of Pilot Goggles, but yours might increase damage done by main weapons and mine might improve ink refill rate in squid mode. There are over a dozen modifiers that can be found on gear, and to unlock them (see how some are black circles with ?’s) you have to play the game while wearing that piece of gear. This means you might be spending time (and coin) finding the best gear and using it to finally get a set that matches your play-style.

You can also utilize a back-alley NPC to do “back-alley deals” and copy an item you found on someone (though it may have different modifiers). This ends up costing a lot of coin, but is a great way to get some of those cool items.

Octo Valley
Splatoon also has a single-player mode. Did you know that? I certainly didn’t, and neither did most people. Turns out this single-player mode functions as almost like a Mario 64 type of platformer where your goal is to reach the ‘star’ at the end. Collecting orbs and completing challenges allows you to upgrade your single-player gear. It’s definitely not a mode to simply ignore. 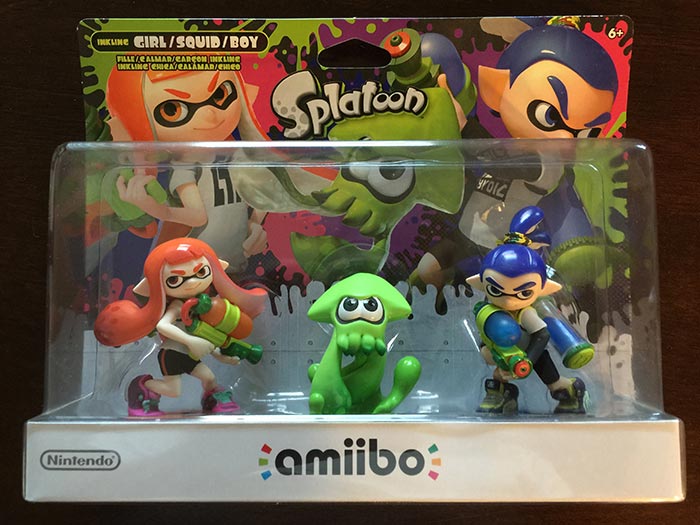 Challenges are unlocked via the Splatoon Amiibos. I picked up my Splatoon Amiibos off of Amazon in the 3 pack. The Amiibos unlock challenge modes which allow you to go back and play the Octo Valley levels but under certain criteria. For example, InklingÂ Girl wants you to go back through each level and play using a charger weapon (sniper rifle that charges up) and the Squid wants you to beat them in under a certain time. Challenge modes are great because they add more to do and provide great rewards such as gear and coin.

Multiplayer
Multiplayer mode is where Splatoon really shines. There are two main modes where you’ll participate in 4v4 battles: Ranked and Unranked.

Playing with friends is a little… challenging. You can join friends who are on your Wii U friends list, and it works great. Graev and I are always able to join games together, and when the game is full it just queues you to join. Unfortunately, that doesn’t guarantee you’re going to be on the same time. In fact, more often than not we are on opposing teams and having to sadly ink each other to death (usually Graev obliterating me). In a weird way, though, this works. It helps alleviate teams stacking and creates a reason to yell at your TV since there isn’t voice coms built into the game.

Splatoon does something that some people find annoying, but I think is a great way of making the game stay fresh: Map rotations. The maps you can play on are limited to 2 maps at a time, and they rotate out every few hours.

One of Nintendo’s Best
SplatoonÂ isÂ not only a fantastic game — one of Nintendo’s best in a long, long time — but it represents a new Nintendo. I hope this is Nintendo realizing that connecting players together to form virtual communities across all of their devices (as alluded to by Nintendo themselves via the new system replacing Club Nintendo) is their future. Regular in-game events are just icing on the cake and the tip of this iceberg as all of the players participate together to unlock new features and maps.

I think Splatoon is the start of being a console seller that Nintendo is looking for. Maybe a few more maps would help — although there are already a decent number, and more being added.

Splatoon delivers on the shooter experience. It’s fun get-in-get-out gameplay that I can jump into for 10 minutes or 3 hours and feel like I am not only accomplishing a ton but immediately enjoying myself. I love it and highly recommend it.