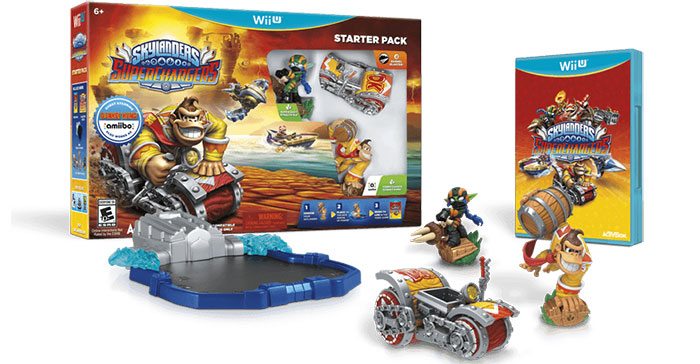 The toys-to-life genre has absolutely crushed the second half of 2015 with one major wallet-busting launch after another, and Skylanders lands right in the middle of the fray with their strongest entry yet: Skylanders SuperChargers. SuperChargers introduces big change to the Skylanders franchise with vehicles, online co-op, and a Mario Kart-esque racing system. Let’s dive in and take a look!

Much of the core gameplay still revolves around the Skylanders figures themselves. Many of our favorite Skylanders return as one of the 20 new Skychargers, each witch a matching vehicle, but a few new characters join the ranks of the Skylanders which I’ll get to in just a moment.

The story is rather thin, as all Skylanders stories tend to be, but that doesn’t detract from the point of each mission: Explore, beat up the bad guys, collect lots of coins to upgrade, and beat bosses. The gist of the story this time around is that Kaos has destroyed much of the islands by harnessing the power of darkness. The Skylands are shattered apart and it’s up to the SuperChargers to use their vehicles to save the day. They’re totally up to the challenge, of course.

In terms of time to complete, the campaign is roughly 10-12 hours for those looking to do a full clear on a harder difficulty. Graev and I played the entire thing co-op, and each mission ended up taking easily 1.5-2 hours. I don’t want to gloss over this point: ONLINE co-op in two different houses with our own copies of the game and our own consoles. You can play finally play with friends!

Each mission definitely had a unique feel with unique looking bad guys and gimmicks. That’s not to say the levels were really all that different in terms of the way in which you went about completing them. The real flavor comes in the form of the new vehicles.

Gone are the days of your Skylander’s element being the main driving force behind much of the game’s side missions. Now there are Land, Sea, and Air vehicle types which will act as the only content gate. You can beat the entire game with just the land vehicle that comes with the starter pack, but to access ALL content you will need one of each land, sea, and air vehicle.

On each level there are side areas for Sea and Air vehicles to embark on a mission related to the level. Utilizing one of theseÂ vehicles will take you on a themed experience designed to show off the new gameplay that differs greatly from what you experience on foot playing as a Skylander. A water vehicle will likely involve battling boatsÂ andÂ navigating treacherousÂ underwater areas. The sky vehicles have you dog fighting massive sky ships, defending convoys, and doing all sorts of acrobatics. These levels are very fun and absolutely worth picking up a vehicle or two.

Racing is a huge addition to the Skylanders series because it’s a way to keep people like me playing. I can run all of the missions a few times, level my Skylanders, upgrade my vehicles, but I ultimately hit that point where I’m done. Racing extends that point a little further. 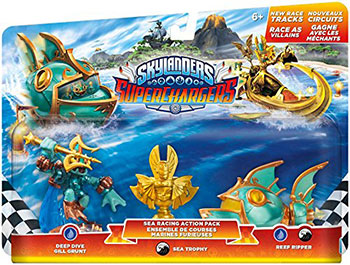 There are several racing modes (see video above) ranging from standard races to themed battles, etc. The standard races are fantastic, and where I’ve spent most of my time. The standard races comes in three types: Land, Sea, and Air (obviously) and require you to have a vehicle of that type to participate. Nefarious, right? But there’s more! You only get a few tracks with the base game and need to purchase the Race Packs to unlock more. And you can probably already guess this, but there’s a race pack for each vehicle type. Right now the Sea Racing Pack is the only one out.

The courses are really, really well-made and fun. Some of them are incredibly long coming in at over 5 minutes. Some of the levels aren’t even lap based but are different the entire length of the race.

While racing you’ll be able to collect items like you do in Mario Kart, but you also get built-in weapons and abilities unique to each vehicle. Even more reason to diversify or find a vehicle you enjoy. Upgrading a vehicle becomes incredibly important because racing with an upgraded racer means you’ll be taken out less often and you’ll be able to knock others out of races much easier. 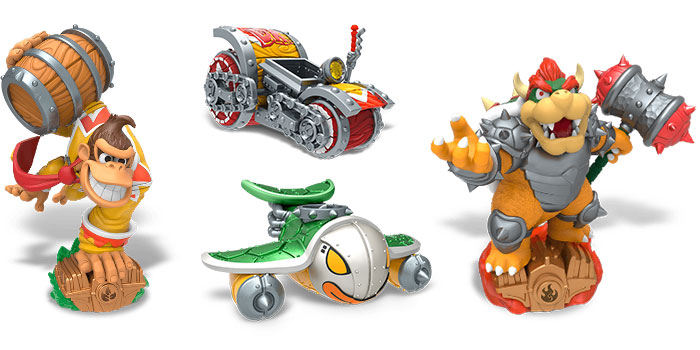 Nintendo partnered with Activision to bring two of their characters into Skylanders: Donkey Kong and Bowser. Both of these characters are fully-functional Skylanders and Amiibo. Each come with their own vehicle, skills, and unique flare. The only catch here is that they are usable ONLY on Nintendo consoles and devices. That means you’re going to get the Wii U Starter Pack for Donkey Kong, and the Wii or 3DS Starter Pack for Bowser. They are absolutely awesome characters — we pulled the trigger.

Skylanders SuperChargers is the best Skylanders game yet. Online co-op, online racing, new vehicles introducing less content blocks (but more to buy), and the diversity of gameplay provided are huge reasons to get SuperChargers if you skipped a previous entry.

Even on the Wii U version, which does technicallyÂ have lower quality graphics, I never felt like the game was ugly. Vicarious Visions does a nice job on the visuals and the game has definitely taken a step up graphically. My two biggest critiques areÂ the ridiculous load timesÂ (They are obnoxiously long) and some camera issues. I also dislike how cutscenes tend to repeat themselves if you go back to an area without advancing past the point where they previously showed you a cutscene. I suppose those are minor complaints for an otherwise very fun game.

If you can look past the wallet-smashing nature of the toys-to-life genre,Â I highly recommend Skylanders SuperChargers.