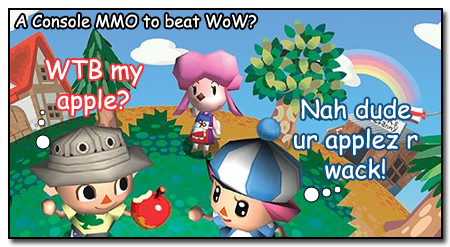 I was browsing the web (I tend to do this a lot…) reading various articles on the recent Sony debacle and came across this interesting interview on GamesDaily with John Smedley.Â  My original plan was to avoid any blogging about this topic because it’s been done to death and chiming in at this point would really add nothing.Â  But one question in this interview has given me reason to break my silence.

On whether we’ll see an MMO on consoles to rival the success of WoW:

“I absolutely do [think we’ll see that], and in fact I think by having a stable platform where every customer has an online capable box is a huge, huge potential advantage in building an MMO because you’ve already got an online userbase. It’s a massive advantage over the PC and we don’t have to worry about graphics cards or things like that. It’s going to be very big. Console online gaming in general I think is going to be one of the next huge phases of growth in the online gaming space.”

Never. Going. To. Happen.Â  Especially when the console in consideration is likely the PS3.Â  Taking the least successful console and expecting a 10 million+ subscriber-base is taking things to the Brad McQuaid level of crazy.Â  The only console that I could ever foresee even coming close would -maybe- be a Nintendo mmo on the Wii with one of their enormously popular IP’s like Animal Crossing, Pokemon, or Zelda.Â  It would have to be free to play and simple so that the target audience would be that of Maple Story or Club Penguin.Â  But Nintendo has already come forward and declared that, for now, they have no plans to work on a mmo.

Console gaming is far more popular in raw numbers than PC gaming.Â  However, the numbers do not support any justifiable argument that a console MMO will rival WoW’s success.Â  It’s not a simple “if you build it they will come” scenario.Â  If you make any effort to get in touch with the console gamers you’ll realize the vast majority of them have absolutely zero interest in a mmorpg.

In the words of the Tauren Chieftain, “Hey. Puff-puff give!”, Mr. Smedley.