On the Wii Virtual Console there are several older games available for purchase/download. Graev and I, being huge fans of the DK series since we were Jr. gamers, couldn’t resist the urge to download Donkey Kong Country. We actually purchased and downloaded the game several months ago but have played a few levels here and there when we are bored out of our skulls. 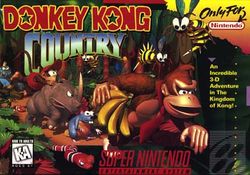 For several months we have been stuck on level 29 – Tanked up Trouble – where you have to ride this platform of sorts that runs out of gas as it goes along. To refuel the platform you have to hit these barrels of gas. Sounds simple enough, right? Wrong. The platform encounters several annoying obstacles likes bees, rodents, and many more of Kong’s mortal enemies. We had been stuck at this one part in particular with bees when the platform only has a a few lights of fuel left. What makes this level so much more difficult than it really should be is the stress involved. They only give you 5 lives and here’s the worst part – you can’t save before this level. That’s right, you have to beat the boss of the previous world in order to get back to this level if you die. ARGH! So frustrating. I think I’ve actually cursed the name of Rare on a few occasions.

Remembering back when we first played the game on the SNES (back in 1994) we were just little guys – but somehow we were 100x better at this game. I’m actually scared right now. I’m having flashbacks of my Dad playing with us watching him jump up and down as if his motions would somehow augment Donkey Kong’s movements on the screen. I remember him getting frustrated with Super Mario World trying to get Mario to fly… he must have spent 5 hours mastering that concept. I remember looking at him thinking “this is so easy!” but to him it must have been like learning how to ride a bike or how to walk all over again. I now know how he felt.

14 years later, I think I’ve lost some of my oldschool gamer mojo. Graev is still a moderate expert at these games, although he runs into the same trouble I do when the levels are just near impossible. But the simple concept of running and jumping has somehow taken on a whole new level of impossible for me. When it’s my turn to play a level or to take over I seem to die several seconds later from an ill timed jump onto the head of a rodent or a misjudged distance to a platform.