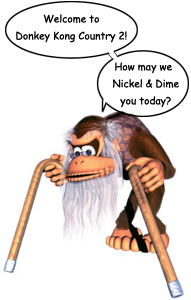 First let me wish you all a Happy Easter and a good weekend. It’s been a decent weekend so far for us as we take it easy and deal with this heat wave hitting Socal. It was 87 degrees yesterday and today is easily as hot – funny how I think it’s hot now since the summer will probably be 110, but to go from 60 degrees to almost 90 in a week is crazy. Thankfully there is a reason to live on through the heat – Easter Dinner!

On the gaming front we’ve made progress in Donkey Kong Country 2 having beat the first two worlds (almost 3) and hovering around 30% completion. I had forgotten how much different 2 is from the first. It’s full of collectibles and secrets that the first lacked by comparison: DK Coins, Bannana Coins, Kremlin Coins, several animal mounts/friends, etc. There are also a few new moves with Diddy and Dixie team-up combos. It was a huge shocker to be smacked across the face with what I consider in-game microtransactions. This old Kong lady wanted to charge me 2 coins to save – 2 coins! Then Funky Flights wanted 2 coins to travel! And Kranky wanted 2 coins for info! *shakes fist* Other than the that it’s a really fun game that’s bringing back a lot of memories. We spent a lot of time being stuck on this one particular Bee Boss… I’m not looking forward to the blood and tears this time.

We also picked up Bully Scholarship Edition (On the 360) this weekend. I just started and find it to be very entertaining with a sense of humor. It’s Grand Theft Auto on training wheels but still has all the lovable elements from a Rockstar game like beating up rival factions, getting the girl, and a headquarters. So far I’ve made friends with the nerds and convinced this one girl (who has a rather unhealthy addiction to chocolate) to be my gf and another who loves books to be my 2nd gf and another who at first couldn’t stand my violent tendencies but learned to like them to be my 3rd gf. Now if only I could convince the bullies that I’m really one of them I’d be in business. Good times.

Toss in a bit of Super Smash Bros. Brawl and that’s our weekend. We hope you all have a great weekend full of gaming.