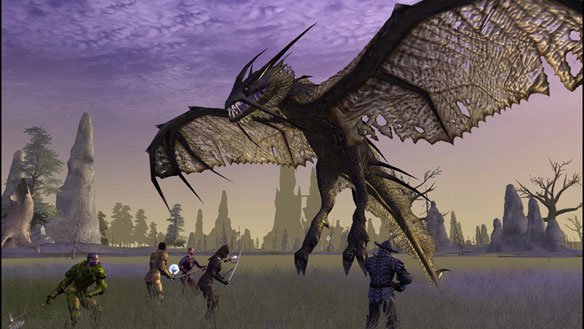 Scenario: A random stranger runs straight past you and essentially trains you, they don't warn you or say sorry and then they leave the zone. You don't have any way to get back to your corpse - What do you do? #PRF #MMORPG #MMO #communitymatters pic.twitter.com/XaizZFqsaj

The responses so far have been interesting. They've ranged from messaging the person to tell them what they've done wrong to laughing about it. Some people want to shrug it off, others want to just call their guild for help.

What I find most fascinating about the responses are how they seem opposite of a previous question the community faced about how they'd deal with someone stealing their mobs. The overwhelming result of that question was to train the person. Huh. Let's ignore the irony for a minute.

I don't think messaging the person and informing them of the misdeeds will do anything other than maybe making yourself feel better. It's like the guy who cuts you off in traffic. Why do they do it? Because they simply don't care. They're more important than you, they're the only ones who matter, and you're in their way. Try to find them and tell them what they've done is wrong. I imagine that'll go well.

You CAN'T Get Your Corpse

The question I read implied you CAN'T get to your corpse when it says, "you don't have any way to get back to your corpse." I think that's important because, to me, that's the crux of the entire question here. What do you do?

I remember when I was trained on in the early days of EverQuest (1999-2000) and I couldn't get my corpse. I spent DAYS trying to get my body back.

What crossed my mind wasn't humor. I wanted to cry. All of my gear was on my corpse. Months of work rotting away, unreachable.

I didn't think, "I'll just go work on trade skills," or "I'll just log back into the game another time." My corpse was rotting and would actually disappear after a period of time.

After three days and even pulling an all-nighter, a high level monk finally took pitty on me and dragged my corpse up from the depths.

I never want to experience that again.

You want to know my answer to this question? I would probably quit the game or come darn near close.

While these mechanics often lead to deep social constructs, immersion, and even fun, there's a line and a fact that these often good-intentioned mechanics don't always create a fun game.

Training is probably fine as a mechanic. I like that danger. I don't like being trained, but I can appreciate how it makes the world feel a whole lot more dynamic and real.

Death penalties are probably fine as a mechanic. Death should sting, so a loss of experience or a penalty to recover your corpse could work. Note: Never unrecoverable.

What I think must be avoided is a situation in which all of these mechanics come together to ruin long-term fun, make people quit their character, or pull an all-nighter on a school night in order to avoid losing everything.

I hope Pantheon won't be an MMO where one nameless person training you (accidentally, ignorantly, and maliciously) can cause such an enormous negative impact on your current and future fun. It's still a game.