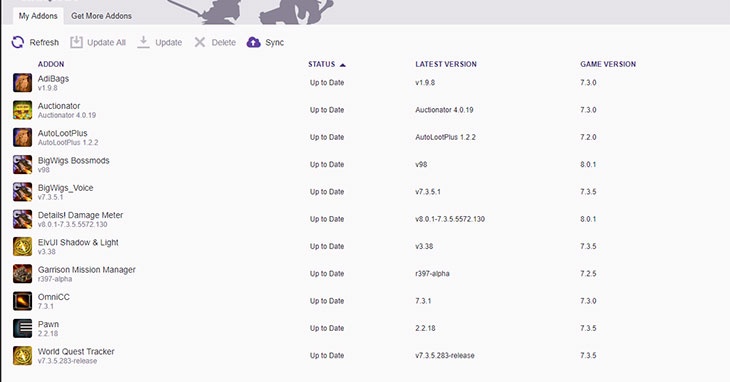 I like these questions from the Pantheon Twitter. Keep them coming guys. They recently asked the following question.

Do you use add-ons (Dps and Aggro meters, Healer helpers etc.) in other MMORPGs and if so, what do you like about them?

I've been at this a long time. In the past 10+ years you guys know I have never been a fan of addons in general. I download addons typically to fix a problem or add a feature that is missing and should be a feature of the native UI. So naturally the very idea of addons has a negative connotation in my mind.

Naturally, there are situations I use addons and not all are inherently bad. I'll dive into these categories and talk about them briefly.

In yesterday's post I wrote about how Blizzard is removing an add-on's ability to automatically (from a button push) form a group for people who are within an area of doing a world quest and wanting to play together.

That plugin functionality fixed a problem that I previously had with WoW: Content was annoying to do solo and faster to do in groups, but forming groups took more time and was more annoying.

To me that was a nice feature, and one that should be adopted into the default WoW UI. Maybe it will, so I'll reserve my animosity.

Add-ons that customize colors, the size of things, how things look with different skins and decorations, and overall only influence what the players themselves see in terms of how things look are totally fine.

Cosmetic add-ons are absolutely acceptable in my opinion. I think most of these customization should be in a standard UI, but since most devs seem deficient in UI design it's often left to players.

These add-ons are where I draw the line and I think they almost always go too far. In fact, they've gone so far over the years that they've become mandatory for players. Furthermore, some mods are so mandatory that I think the games themselves develop around knowing players will use them. Deadly Boss Mods and its kin come to mind.

DPS meters are one of the worst add-ons to ever exist. Their very existence has transformed communities into vile, competitive, and judgmental goons.

On the surface there's value in knowing whether or not you're performing well. If a DPS meter simply showed you only your DPS, and you had a metric to judge yourself by, then fine I think there's nothing wrong with that. But these meters show you everyone, rank you, and inherently create a loser.

I've seen people who are nice and kind to someone pre-raid turn against them and then stop associating with that person and even talk bad about that person because of the reported results on a DPS meter. DPS meters are easily one of the top contributing factors for why I stop raiding every expansions.

An MMO with No Add-ons

I would actually be excited to play an MMO with no add-ons. I'd expect the devs to make that default UI customizable and to not leave out any necessary features, but I'd also be very forgiving because I wouldn't have to deal with gameplay altering addons.

Add-ons have caused more harm to my MMO enjoyment than good over the years. When you really think about that implication... that's pretty powerful, and sad.