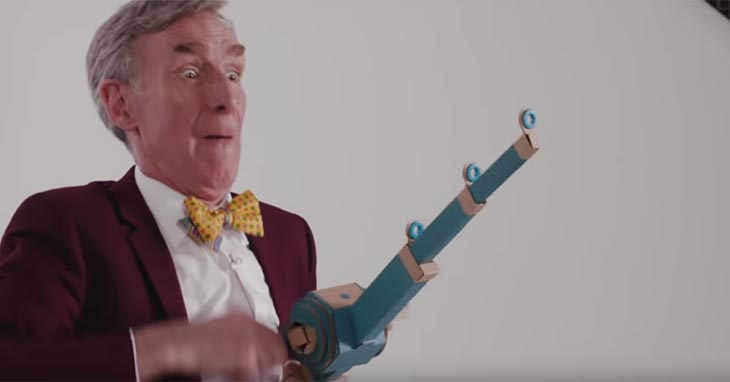 Nintendo Labo is now available today in North America. Nintendo smartly grabbed Bill Nye the Science Guy and had him do a product demo.

I think Bill Nye is a Goa'uld, or has at least mastered the powers of the sarcophagus because this guy looks exactly like he did when I watched him 20+ years ago.

Bill Nye does a really good job showing the gist of these toys / learning devices. The first hurdle for people to get over is the construction process. Using the Switch screen as a touch-screen and display for building instructions is brilliant.

I'm still trying to figure out the target market with Nintendo Labo. On one hand, the gimmicky nature and silliness says this is a children's toy. The complexity of building something quite fragile (literally made of cardboard) says this is for older kids.

The experimentation and "programming" aspect of the toy also says "older kid", but I'm always surprised by how intelligent even kiddos as young as 5 can be when it comes to figuring out cause and effect as it related to technology. Programming the little toys with "press this to do that" could totally be doable for little kids.

Adults like me would have fun tinkering. I think adults participating with the kids is a crucial piece of this marketing strategy. The adults will help build them, tinker with them, and encourage the kids to player with them.

Kids will probably like to decorate them with their own art supplies or something like the Labo Customization Kit. Putting eyes on them, stickers, coloring in the cardboard, etc.

In addition to figuring out who the Nintendo Labo is meant to appeal to, I'm also trying to figure out if these have any staying power. As I kid I would play with erector sets and gadgety toys often. I'm not sure they had the same staying power as a GI Joe or a Donkey Kong video game. There's a lot of fun in the set-up phase, but then you're left with just a little bug that moves via vibrations (and doesn't do much else) or a fishing game that can't possible be THAT dynamic, I don't know if there's much left to enjoy for more than a few days. It's fleeting.

Over-evaluating the toy, tech, or whatever it is probably isn't fair. Whether you think a minimum investment of $70 justifies the fun you'll have or not is really the only question to ask yourself.