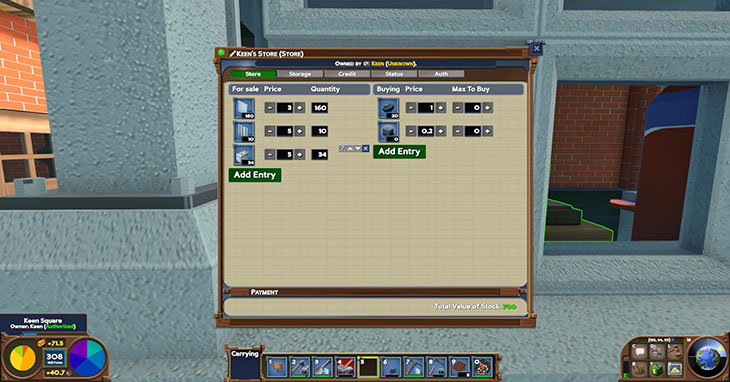 I was playing ECO last night and messing around with setting up a shop to sell my excess resources (at a zero sum rate to friends) when I started to think a bit on the idea of player currency. In ECO, there's individual currency in the form of a credit. If I sell you 1 log of wood, you pay me in "Keen Credits." There's also the ability for players to mint actual circulated currency. This currency can then be used to trade wherever players would accept such currency.

Last night I made Bitkeens, my own personal minted currency. Then it hit me... how do I get everyone else to use these Bitkeens as their main currency on the server? They all have their own personal credit systems, but no currency. Each of them could technically mint their own currency too. How would Bitkeens become to common currency? Minting my own player currency in ECO

Therein lies the core gameplay mechanics intended by the developers for players to devise their own economy. Clever, and thought provoking.

I need to create an incentive for other people to use Bitkeens. Do I offer up goods and services others would desperately want in exchange for Bitkeens? That would force them to come up with ways to acquire my currency. Then, when they go to purchase from another store, the store owner would want to accept payment in Bitkeens rather than their own credit because they could use that currency at my shop.

Wow. That's awesome to think about.

We talk about player-driven economies as they pertain to MMOs and Sandbox MMORPGs all the time, but we never get that deep.

We've seen players gravitate towards models of adopting thier own currency. In Diablo 2 it was SoJs, in EQ it's gone towards Kronos, etc. In many games the digital coinage system is actually so inflated people turn away from it in favor of something more 'valuable' to them -- even if that item is essentially backed by the in-game currency. Currency Exchange from other people's credits into Bitkeens

In ECO, there's even a way to exchange currencies. I set up a currency exchange in my shop to allow players to redeem credits from other players in exchange for my minted currency. I'm not an economist, so this is an experiment. I'm trying to see if I can remove other player's credits from the market and flood it with Bitkeens instead. I know it devalues my own currency, but it also removes the other currency altogether. The trick is figuring out an exchange rate (which is currently set at 1:1).

A game with player-created currency and a true player-driven economy boils down to value, which is derived mostly from marketing your currency and services to other players. What a fascinating and fun experiment that would be in a MMORPG.