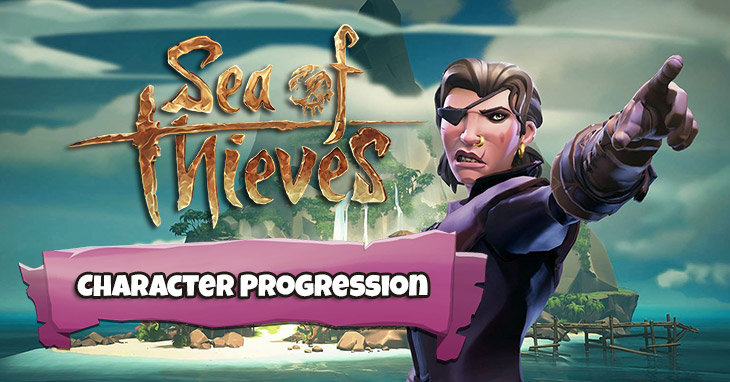 I am so beyond ready for this game to release. There's a ton we can't talk about as Alpha testers, but the Sea of Thieves dev team has released a video all about progression with tons of details for us to share.

As a pirate in Sea of Thieves, it's important to look the part. That's why you can customize your character with all sorts of pirate-themed regalia.

The key to remember in Sea of Thieves, from what we know so far, is that most of this stuff is cosmetic.

To echo the dev team, a cutlass is just a cutlass, and a pistol is just a pistol. What you do with it is what matters. Of course, looking the part is important too!

From videos, including this one, we see that different outfits will cost gold. Gold is earned from voyages, exploring, and working with trading companies.

Outposts of the world are inhabited by factions of sorts. These trading companies represent play-styles. Order of Souls - Control ancient and mysterious magic of the world

Each trading company allows you to progress and be promoted within the ranks of that faction. Players complete activities or "voyages" of that trading company -- aka quests -- that unlock perks and special faction specific bonuses. As you progress within your trading company, you'll gain access to more advanced voyages. These voyages are represented visually with a scroll that other players can see.

When you form a crew, each member brings their voyages to the table. Players then propose their voyages and share their progression with the crew. The crew then decides together which voyages they embark upon. This means there are plenty of benefits for being part of a crew since you'll be able to go on voyages you normally couldn't access alone.

One of my favorite aspects of progression in Sea of Thieves is the lack of vertical progression. There's nothing stopping players from playing together, even if one player has access to the most advanced and complicated voyages, and another player just started sailing yesterday.

Weapons are just that -- weapons. It's how you use them that matters. How your crew plays together to man the ship is what matters. Whether you're relying on the keen eye of a lookout in the crow's nest, or the impeccable aim of a cannoneer. What ties it all together is a world of players all out there doing the same activities. While your crew has a particular set of voyages to complete, nothing stops you from stumbling across another crew doing a completely separate set of missions. Maybe you're on your way back with a hold full of chickens and pigs for your Merchant's Alliance mission, and you come across another crew with a ship full of gold. TAKE IT! After all, you're a pirate!