It’s a little odd how I’ve been posting about a lot of Disney stuff lately, now that I think about it. Actually, it’s kind of funny since DuckTales a bit back, Disney Infinity now, and Kingdom Hearts 1.5 HD just came out and I’ll probably be writing about that as well. I guess it’s just a heavy Disney season, eh?

I’ve never played the Original Castle of Illusion game, an admission which could probably get me stoned in some places, but I did always want to. Actually, I haven’t played most of the original versions of fantastic old Disney games like this, Aladdin, DuckTales, etc. I start to ponder why that is and then remember it’s most likely because I was playing Donkey Kong and X-Men instead. I was able to play through the original game, however, after it was made available after pre-ordering the remake on PS3. There seems to be a lot of mixed feelings about the game but I actually really love it. Maybe that’s because I didn’t grow up playing the original or maybe I’m just not that picky.

It’s Mickey Mouse! Running through a castle, jumping into illusionary worlds, collecting gems, fighting bosses, rescuing his girlfriend, and so on. Classic side-scrolling platforming with a touch of the 3D. 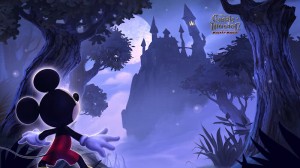 Personally, I love the visuals on this game. They may not be as charming as 2D sprites or artwork but they are still super nice. Mickey looks great and the backgrounds are beautiful to look at with tons of stuff going on. I think they did a great job on recreating the environments from the original game and expanding upon them. The game is a side-scroller but everything looks rendered in 3D. Every now and then the game actually allows for three-dimensional movement and platforming but for the most part it is a side-scroller. The game’s hub world actually reminds me a lot of Peach’s Castle from Mario 64. It may not be nearly as big but it allows for similar three-dimensional movement and the levels are portioned off into doors you need to unlock.

The whole game is narrated by whoever plays Sully in Uncharted. This seems to bother a lot of people. Not that it’s Sully but the constant talking. Honestly, I don’t think he talks all that much and I actually really like it. I think it adds to the whole experience. That might just be because I have fond memories of King’s Quest 5’s voice-over narration (Ahh! Life giving water! Nectre of the Gods! Graham can feel strength and renewal flowing through him.) and I think John Rhys Davies narrating Quest for Glory 4 is about the bitchin’-est thing ever. If it really bothers you you can actually disable it so I really don’t see the problem.

This Looks Familiar & Oh My GOD! THE MUSIC!

One thing that I really have to credit this game with is it’s ability to recreate the scenes and locations of the first. I’d play through parts of it and constantly be thinking, “Oh hey! Yeah I remember this part in the old game!” It actually made me want to go back through the original and take notice of all the similarities.

As far as the music is concerned…it just blows me away. There were times when I just stopped to listen and take it all in. It’s incredibly fantastic and if there was a soundtrack I would totally have purchased it already. I mean, it was arranged or whatever by the guy who did Banjo-Kazooie so you just know it’s going to be good. 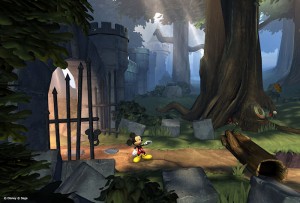 I still don’t understand what “floaty” means in terms of platforming mechanics. It seems to be used as a negative and describe unresponsive games. I guess the characters seem to somewhat float through the air when they jump or something? From my experience most platformers play differently and your mileage in something like Super Mario World is going to totally differ from stuff like Rayman. I guess I’m just able to adapt well enough to games and not be bothered by it. I haven’t had any unresponsive issues with the game and everything seeks to work well.

You travel through each level and jump around. To take out enemies you merely jump on them. Unlike the original game, you aren’t required to hold down the jump button again or risk taking damage. I guess this does make the game easier somewhat but it doesn’t seem like a deal-breaker. You still need to hold the button if you want to bounce off them and get increased height.

The boss fights are kind of interesting. Some are straight-up two-dimensional battles while others mix in some 3D movement. They’re actually not too bad for the most part. The final boss is kinda different but I probably shouldn’t spoil that. The three dimensional movement is okay for the most part but can at times be a little jarring. There are sections of some levels that require you to switch things up and move three-dimensionally and it can seem out of place and confusing. I like the idea of it, though, and I would be interested in seeing this kind of mixed-perspective platforming with maybe some tighter controls.

Overall it’s a really fun experience and I enjoyed my time with it, even if it was a little on the short side. The whole game is over sooner than I would have liked and unfortunately doesn’t seem to have any additional difficulties. The game is already mildly easy with the amount of extra lives they throw your way so unlocking some kind of hard mode would have been nice. Sure it may have it’s quirks but it’s a charming little game and hopefully it, along with DuckTales, marks the return of more classic Disney games.