Well, this has been one absolutely awful launch.Â  Only WoW’s launch was worse, but at this rate FFXIV may take the crown if circumstances do not change soon.

Despite some problems with the instance server, stability has been remarkably good.Â  What hasn’t been good – at all – are the restrictions placed on the server by Square Enix.Â  There’s no queue.Â  Instead, players have to hammer the servers non-stop until they randomly, by pure luck, get a spot.Â  There are scripts already available to automatically retry for you.Â  It’s pathetic. 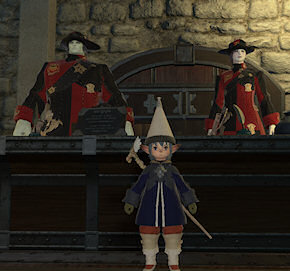 That’s assuming you already made a character.Â  Not lucky enough to make one early (as in the first day) of Beta 4?Â  Square hasn’t allowed players to make new characters on most if not all of the NA/EU servers.Â  We have slightly less than half our guild unable to make characters, stranding them to either not play at all or join a Japanese server.Â  These are people who paid good money to legitimately pre-order the game.Â  That’s not right.Â  Some sort of queuing system should be implemented to allow them to make a character.Â  Even if the list is 10,000 people long, they would know when they can make one.

I’m one of the lucky ones.Â  Even though I have to spam the login server for 30 minutes to 3 hours, I still get in and I can still level up.Â  I got our Free Company (guild) formed this evening, and I’ve been able to progress a decent way into the main story.Â  I have my Chocobo, I joined a Grand Company, and I’m continuing to form my opinion of FFXIV

The main story has been really good.Â  There are a few filler quests in each of the areas as the story is slowly introduced, but for the most part there’s this overarching story that has finally been made clear.

The sidequests, however, remainare really bad.Â Â  I was hoping they got better, but they’ve actually grown worse. We just finished this area in the level 23ish Gridania zone that literally sent us to an area six times.Â  “Go grab this item.”Â  “Okay, now go back.”Â  “Good job, go back again.”Â  “Now again.”Â  Thankfully the sidequests are only a very small part of progressing, and definitely the slowest form of leveling.

Despite the launch issues and horrible quests, there’s so much more to the game than I even knew.Â  Chocobos, the mounts, can actually join your party as a healer, tank, or dps.Â  The UI has so many subtle nuances that give members of a group tons of information about aggro.

I continue to find new things to love, and feel confident that FFXIV will be a game to play for quite some time.Â  If only Square can turn things around in time to avoid a meltdown, there’s a great future ahead of FFXIV.