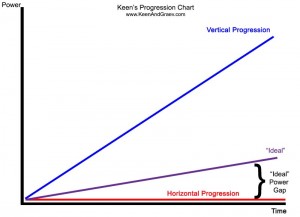 I was thinking tonight about what to write tonight (I’m suffering from some massive writer’s block) when I decided to catch up on the Camelot Unchained videos that released while I was moving; Mark did like 5 of them in one day.Â  I watched the video where Mark talked about character progression and how he wants Camelot Unchained be a game all about horizontal progression with very little, if any, vertical progression.

The knee-jerk reaction these days is to immediately think that horizontal progression is the way to go.Â  So many people are tired of the gear grinds and this constant desire to chase the carrot upward.Â  Vertical progression is this horrible monster that makes characters stronger the older they get, and lets them one shot new or ‘less vertical’ characters.Â  While true, that depiction chooses to demonize the worst aspects of vertical progression while ignoring the upside.Â  Horizontal progression isn’t perfect.Â  I get really bored when I feel like my character isn’t progressing in strength.Â  Being able to do things ‘differently’ isn’t always as satisfying to me as being able to do something better.Â  Achievements are boring.Â  Relying entirely on the skill of the player and teamwork can only take me so far before I feel like I’m playing an arcade game or Counter Strike.Â  Sometimes I don’t want the playing field to be perfectly equal.Â  Sometimes its not enough that my fireballs are green and yours are red.

Dark Age of Camelot had vertical progression.Â  Realm Ranks were almost like an experience system for max level players killing others in RvR.Â  You kill a player, you gain some realm points. Those realm points earn realm ranks, and with those realm ranks you can unlock abilities to make your character stronger.Â  That is vertical progression.Â  A RR8 character had abilities that a RR2 did not have, and as a result that RR8 had an advantage.Â  Was the advantage huge? No, in fact a bad RR8 player would still be killed by a good RR2, but the RR8 was technically elevated above the RR2.

I’d say I want to expand the breadth of my abilities, but can that really be done without it being at some inching towards moving vertical?Â  If I unlock more abilities that others won’t have if they haven’t unlocked them, isn’t that vertical progression?Â  If I have more tools in my tool belt than you, with everything else held equal don’t those abilities become an advantage that an older character will have over a new one?