Camelot Unchained is getting closer to their goal, but even closer to their deadline.Â  I’ve pledged, and I think a lot of our readers have pledges as well.Â  CU’s building, and in a way part of its crafting, system was revealed recently.Â Â  Personally, I would have lead with this information.Â  This is huge.Â  In fact, this is indeed unique and revolutionary, and something that really needs a lot of attention.Â  I think Camelot Unchained’s building will be at the forefront, at the very core, of everything players are fighting for in RvR, and everything players are working towards.

Why fight to win in RvR? Simple: Finite Resources.Â  What do you do with those resources?Â  You build whatever you want in a system that resembles Minecract.Â  Watch the video below. 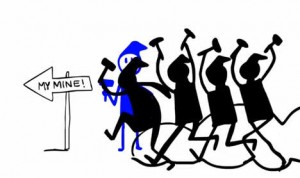 I have my concerns.Â  These past few days my thoughts have been centered right on the necessity of guilds, and one of my all-time biggest complaints about modern PvP games has been this elitist jackassery that we see in games like GW2. There are these big guilds who think they are God’s gift to the game and they the only ones allowed to own, do, or lead anything.Â  There becomes this stigma and unwritten rule about taking an area or even participating in PvP if you’re potentially taking the spot of someone else who for some reason ‘deserves’ to be there more than you or should own a keep because victory is more assured if that guild owns the area.

I’m worried that the mine locations in Camelot Unchained will be treated with this same inevitable elitism.Â  I’m calling it right now; if I roll up to a mine that Wart’s guild has built around and I start tapping away, I’m going to get grief for taking resources away from Wart’s guild who, for some reason, think they own the thing and have a claim to the resources inside.Â  Just because a mine doesn’t run out right away, that doesn’t change the nature of the typical entitled elitist.Â  I see on the list that mines can be claimed.Â  If individuals or guilds claim mines, this will be a disaster that will destroy realm pride and unity.Â  I still need to be convinced this isn’t destined for epic failure.

The building system sounds awesome, though.Â  Placing each cell individually the same way I would if I played Minecraft has me already thinking up ways I’d build a base.Â  Being able to roll up on an enemy’s base and break it down into raw materials introduces this entire new way of getting the crafting side involved.Â  If a player just wants to set up a house/shop and sell weapons, he or she can do so.Â  But if a crafter wants to be apart of the combat, they can roll up to a siege, or participate in the salvage operation.

My mind is racing with creative possibilities for this system, but I don’t want to get ahead of myself and start imagining things that CSE isn’t capable of doing.Â  So for now I’ll just take what they’ve said in the video and know that it sounds like a ton of fun.Â  I have my doubts about the mines and their faith in humanity, but maybe there will be a way to keep people in check.

If you haven’t already, consider pledging.Â  Camelot Unchained needs your help to get funded because without it we’ll just have a bunch of ideas and no game.