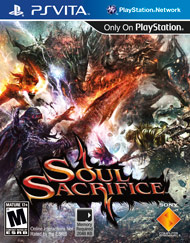 Recently the last bit of my willpower eroded away and I found myself with a brand new PS Vita. There were several different factors that drew me to the system but chief among them was Soul Sacrifice. The game doesn’t actually release until the 30th but there is already a fantastic demo available that shows off several of the game’s key features.

Soul Sacrifice is Action RPG where you take up the role of a Sorcerer and run through various missions killing monsters. That kind of makes it sound like Monster Hunter, but it really isn’t. There are several different kinds of spells that you can utilize and they can do anything from shooting projectiles, shielding you, healing you (and others), and onto more basic combat stuff like combo attacks, dodging, etc. Say you pick the Giant’s Arm spell… After you active it your right arm turns into a huge fist and you get to pummel guys. There is lots of cool stuff like this.

One of the more fascinating aspects of the game comes from the title itself — Sacrifice. When you defeat a creature or boss you can choose to either save it or sacrifice it. Doing the former raises your Life level (defense) and while the latter raises your Magic level(attack). The max level in the game is 100Â  (I think. It’s 20 in the demo.) and you can get there with any combination of the two. People that want to play a support role might go more into Life while others may opt to be more of a glass cannon and pump Magic. In addition to sacrificing monsters you can active black rites which essentially sacrifice parts of your body to perform powerful magic attacks. In the demo you can perform Infernus and offer up your skin to blast the area with a huge fire attack. The downside to doing this is that now you’re body is scorched and your defense it halved. It’s a really neat system and I can’t wait to see how it gets further utilized in the full game.

In addition to single player offerings you can do various online missions. The demo contains four and pits you against some of the game’s fascinating monster bosses. The saving and sacrifice system also plays an important role in online games. When you or a teammate is on the ground dying you get the choice to either save the person by offering up some of your own life, thereby getting them back in the fight, or sacrificing them to perform a powerful attack. If you get sacrificed you stay as a spirit of sorts for the rest of the mission, but you can still be of help.Â  You can see the health of the boss and by utilizing the touch screen you can boost the attacks of your allies or lower the defense of the monsters. Sure some asshole might sacrifice you even if you don’t want him to, but what can you do? Actually, opting to be sacrificed makes sense in a lot of situations. Say the boss is on his last leg… Getting sacrificed can do a lot of damage and finish him off. Plus, getting sacrificed also nets you some bonus points and martyr rewards at the end of a mission so it isn’t as bad a thing as you’d think. I’ve actually asked to be sacrificed more than once.

It’s a fascinating game and I can’t wait to get my hands on the full version. The demo completely sold me on the game and I think that it has to be the best demo I’ve ever played. Not only does it contain the first chapter of the game but also 4 online missions. You can get up to a combined level of 20 and collect and upgrade the spells available and transfer all of your progress into the full version of the game. Regardless of how you feel about Soul Sacrifice, this is how all demos should be done.