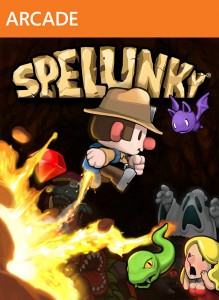 Spelunky, now synonymous with a dozen expletives in our house, released for XBLA last week.Â  It’s an addicting platformer with randomly generated levels, monsters, traps, and a ton of freedom to beat levels in your own way.Â  The trick is, it’s SO SPELUNKING HARD!Â  Death is so fast, sometimes so unseen, and absolutely mind-crushing when you can see the exit to the level but die to a poorly thrown rock or a ill-timed jump.

The goal is to make your way through levels to the exit while earning money, obtaining gear, rescuing damsels in distress, and discovering secrets. There’s a surprising layer of depth to the game, and as you play enough (and die enough) you come up with strategies for beating monsters or quickly progressing.

Shotguns, Freeze lasers, bombs, climbing gloves, spiked boots, hobos with shotguns, cavemen, ghosts that force you to keep moving at a faster pace, and dozens of annoying monsters make the game feel different every time you die. Break blocks to create shortcuts, use ropes to repel, whip each other playfully, buy from shops, sacrifice your enemies on the altar of Kali, find hidden characters, and so much more.

We’ve had a blast with the same-system Co-op (2-4 players). Watch as we fail miserably. I may or may not scream like a girl at one point… or two.

There’s also a deathmatch mode that allows you to battle with your friends on the same system. It’s ridiculous. At this point our only complaint is that we wish there was an online multiplayer option.

Definitely check it out. It’s an amazing little game.