We’re excited about The Elder Scrolls Online.Â  The announcement feels old because we’ve had rumors floating around for months.Â  With so little information available, we have to grasp at the few straws and extrapolate whatever we can get.

The game supposedly takes place across all of Tamriel, “from Elsweyr to Skyrim and everywhere in between.” [Source]Â  That’s jaw-dropping huge.Â  Look at the map below.Â  We played Morrowind and it was enormous.Â  Oblivion wasn’t as large, but Cyrodiil was still decent size.Â  Skyrim was also plenty big.Â  Daggerfall was Hammerfell and High Rock.Â  Combine all of the areas we’ve seen in all of the Elder Scrolls games and it becomes obvious to us that they’re going to adapt the world to work as a MMO.Â  There’s simply no way they’re going to handcraft this to scale with a projected release date in 2013. 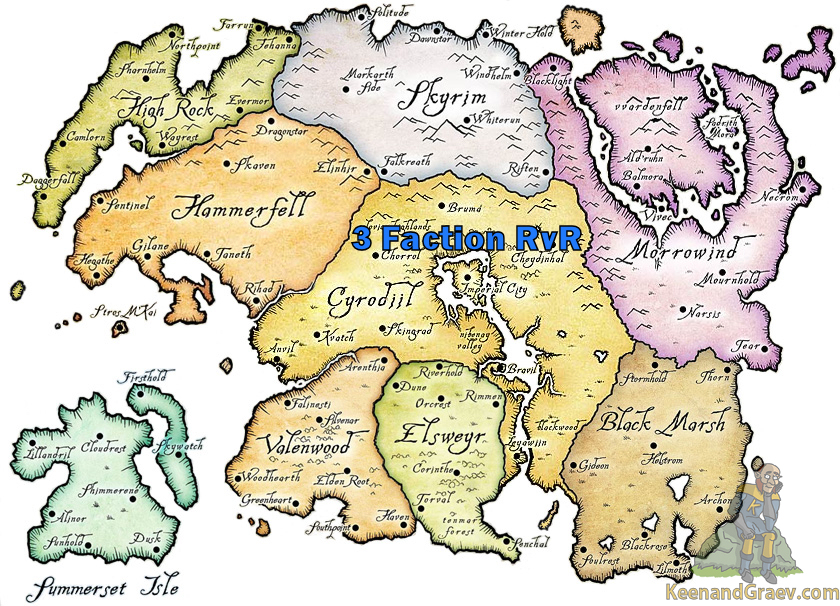 We have our doubts that players will be able to steal anything, attack anyone, or how this will translateÂ  into an MMO unless it’s a standard issue MMO using the same game world.Â  We have nightmares that it won’t be a sandbox.Â  We’ve been somewhat skeptical all along, but those are fears we’ll have to set aside for now.

Cyrodiil will be the site of a three faction PvP conflict.Â  I’m sure this comes from Matt Firor being being the game director.Â  Who will be the three factions?Â  We can think of a few, like the Aldmeri Dominion and the Empire who would be at war during the time before Skyrim.Â  Our memories of Elder Scrolls lore needs to be refreshed.Â  Anyone have any ideas or info we’ve missed? How the three faction PvP will work is also completely left to our imaginations.Â  We’d love to see the area completely open full of locations to control.

Public Dungeons are also mentioned, and again Darkness Falls comes to mind because of Matt Firor’s involvement with Dark Age of Camelot via Mythic.Â  Darkness Falls is a public dungeon that all three factions can enter together, but the portal/entrance to the dungeon is only active in the realm for those holding the most territory in PvP.Â  If not Darkness Falls, perhaps EQ or DAOC’s straight forward open dungeons that do not use instancing but remain open for everyone — imagine going into a random dungeon you find in a game like Skyrim to hunt monsters that respawn, and others would be able to enter right behind you.

The possibilities are so great with an Elder Scrolls MMO, and expectations are so high, especially with ambitions of three faction PvP, that we fear it’s a task no one out there will be capable of pulling off gracefully.Â  This is either going to be really great, or really awful.