What a day this has been so far.Â Â  Classes began today and my first class was canceled while the second class was with a professor that I’ve already had and thus nothing more than roll call and an explanation.Â  That followed up with traffic and just a really busy day and it all amounted to the worst day for a MMO to launch.Â  Then the website went down while my host did maintenance.Â  ;)Â  Lucky for me guildies saved my name and the game was up and ready for me when I got home.

Allods launch day has been interesting.Â  There are a lot of people.Â  More than any MMO launch since WoW, albeit the game is free to play and that’s expected.Â  The lag is … well, the lag is almost as bad as WoW’s in some cases.Â  There was a lot of loot lag happening for us on the newbie island.Â  To get our bags sometimes required running far away from the mob and running back to it.Â  Other bugs like clickable quest objectives being lagged and just an overall feeling of latency was prevalent.Â Â  Playable though, very playable.

The Cash Shop is disabled currently.Â  Some people jump to the “they want to suck you in first” cynicism but I turn to a more logical explanation; if I were them I would leave it down too because of server stability and possible problems facing a MMO on the first day.Â  Introducing a cash shop could result in problems if there were rollbacks and other problems.Â  It’s best to leave it off.

Even with lots of people there has been a shocking level of maturity.Â  Chat channels are as bad as ever, but I didn’t expect people to actually line up and wait their turn for quest objectives.Â  Maybe these screenshots will give you some insight into just how packed it was… these are two different quest locations. 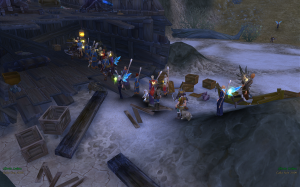 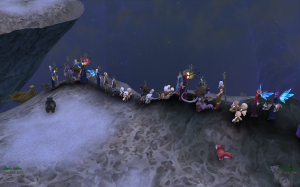 Our guild is up and running and pushing 40 members now.Â  The response has been excellent and we’re all making our way out of the newbie areas to get away from the lag and the crowds which make questing very difficult.Â  Our vent is just exploding with people and I’ve already met some great folks.

Bugs in beta are present.Â  There seems to be one with fatigue that I will not propagate by explaining here, but it should be looked into and fixed asap.Â  Other than that, it seems like a solid launch.Â  I’m level 8 and working my way through the quests in Lightwood at a comfortable pace.