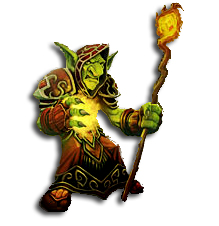 This is truly a great day to be a Blizzard fan.Â  There is so much information pouring out from Blizzcon that I won’t even try to report on it for you.Â  Go to WoW.com or your favorite news site and they’ll fill you in on everything.Â  I’m more interested in how these announcements will affect me personally as an avid gamer and lifelong Blizzard fan.

As I mentioned in my original blog post about the Cataclysm rumors (now confirmed), I said I would be returning to WoW if this all turned out to be true.Â  I meant it, and I plan to return now.Â  Just reading through their FAQ to gain an understanding about what to expect, I saw one line in particular that removed all doubt about what I should expect:

“Kalimdor and the Eastern Kingdoms are central to World of Warcraft lore, and we want those areas to remain an important part of the game, not just a place to train or auction. Our goal is to make questing, leveling, and the overall story more fun for new, returning, and existing players. By redesigning areas of the original continents and introducing new content that matches or exceeds the quality of Wrath of the Lich King, we can revitalize the nostalgia and coolness of Azeroth.”

The “old world” or “vanilla WoW” (whatever you want to call it) receiving phasing technology, the same type of quality from WotLK content, and a major face lift means that I can return to the game and experience 1) Quality content and 2) Nostalgia.Â  We all know that looking back and remembering how content or gameplay was years ago never matches the reality of how it is today, so the opportunity for nostalgia to make an appearance and exceed the quality of yesterday is beyond words.

The trailer shows a few zones that are also mentioned in the FAQ.Â  “Nearly all of the gameâ€™s original zones are being altered to some degree, but the extent of the changes varies by zone”, states the FAQ.Â  I’m hoping that we see surprising changes throughout the game on the same level as Desolace’s transformation.Â Â  While I’m worried that I could possibly be building this up beyond even Blizzard’s abilities, I know that so far they have been the only company to ever match hype with results.

Bringing Deathwing into the fray makes me giddy with glee.Â  Day of the Dragon is an amazing book (that I am now searching for on my shelves to reread) if any of you are interested in some Deathwing lore.Â  Deathwing is probably the coolest “bad guy” in all of the lore making the Lich King look like a scrub.

So whether or not I return to WoW is no longer in question, but rather when.Â  Blizzard is saying 2010 for cataclysm which puts it at around 2 years after WotLK.Â  That gives me plenty of time to enjoy Aion (over a year) and establish whether or not I’ll play it longer.Â  Where this begins to conflict is with SWTOR… this could get messy.Â  On one hand I’m a Star Wars fanboy, and on the other I’m a Blizzard (Warcraft Lore) fanboy.Â  The only chance I have of playing both (due to $$$) would be dropping Aion and playing both SWTOR and WoW.Â Â Â  Maybe this should have been titled “This is a great day to be a MMORPG fan”.

Diablo 3 getting pushed into 2011 or later makes me die a little inside.Â  I was hoping for a late 2010 release.Â  Blizzard is really wanting Cataclysm and Starcraft 2 to be their 2010 titles though.Â  The new class announcement for D3 is the Monk.Â  I remember playing an unofficial Diablo expansion called Hellfire which was developed by Sierra.Â  There was a Monk in that game and he was really fun and seemed to fit right in with the game’s style.Â  The trailer for the Monk does not disappoint at all – in fact it makes me want to abandon any ideas I had about the other classes and play one.Â  Such a magnificent looking environment in that video as well.

I guess it’s going to be a busy year anyway without D3.Â  Finding time to play SC2, WoW, SWTOR (Assuming it’s 2010 and not push out further), and all of these games … awesome and horrible problem to have all at the same time.Â  As I find more information, or more becomes available, I’m excited where our discussions can go about the coming year.

Update: I just learned about the new Battle.net and its features.Â  Looks like we were right in predicting premium services and a Xbox Live direction for the system.Â Â  Profiles, Avatars, Account-wide (not game or character wide) achievements, communication across all games via this platform, and a marketplace.Â  It sounds like everything Graev and I predicted Bnet would turn into.

Makes sense why SC2 is delayed now – they’re adding crap we don’t need.Â  It will be the first game to utilize this market for premium custom made content.Â  I don’t like this idea at all as it appears to be the pandora’s box waiting to be opened.Â  Charging for the popular custom maps is nothing but a cash grab and I don’t buy the excuse about giving modders the credit and part of the money for their effort as a legitimate reason.Â  This won’t be the end of it.