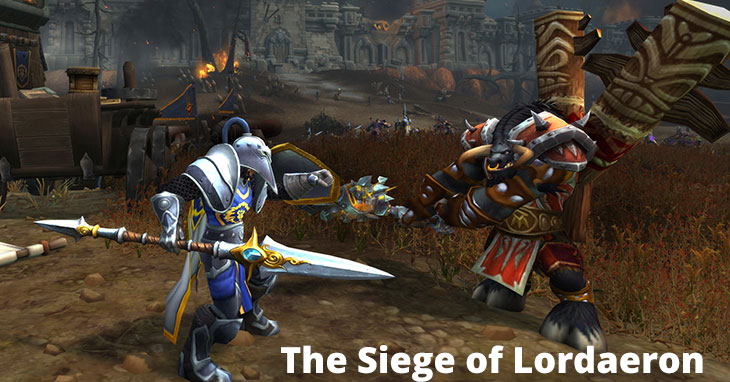 The last pre-patch event before Battle for Azeroth's launch next Tuesday is here and gone all too quickly. In just 30 minutes I completed all of the new content this week. But how did it stack up against what we've seen so far?

The Siege of Lordaeron was definitely the best content so far. Here's the teaser.

The quest begins in Stormwind where the alliance are preparing to depart for war. They did a nice job here. The bells were ringings in the background, the armies heading to the docks, the gryphons and gyrocopters flying overhead. It felt like we were preparing to set out for war.

Upon talking to the NPC at the end of the dock you're put into a 20-man raid and sent on your way.

The battle goes pretty much just like the cinematic. The Alliance pushes forward until Sylvanas unleashes the Forsaken Blight upon her own troops causing them to force the Alliance into retreat.

Just as the Alliance army was routed and about to have to give up, who shows up? Jaina.

Jaina flies in on her magical airship and saves the day by freezing the blight and pushing the Forsaken back. I wasn't impressed by her sudden willingness to show up and save the day.

The scenario transitions now to breaking through the various barriers and beating mini-bosses. All the big names are there to help you along the way.

One of the last 'bosses' of the scenario is Saurfang, who confronts the entire Legion attack force by himself to gain his honorable death -- which I thought he'd given up on, but apparently still has a death wish. Before we kill him, the king stops us and decides to take him prisoner and discuss with Saurfang, at a later date, how he might reclaim his honor. This will surely play some role in BFA.

Players eventually break through all the forces and corner Sylvanas in the throne room. I think I found my new desktop background!

Sylvanas is herself here and banshees away leaving the entire city of Lordaeron in absolute forsaken blight ruin. Jain teleports them all away before they're trapped in the infected rubble.

The event, overall, was nice. I thought it felt more like a siege than anything else we've seen in Warcraft thus far. I think the cinematics were well done. The story is fine. I'll take 30 minutes over 10 minutes of gameplay any day.

All of the rewards were extremely underwhelming, and by "all" I mean literally a weapon choice that's weaker than the world quests in Darkshore.

Blizzard dropped the ball in the rewards department. If the story had been good enough, I don't always need shinies to keep me happy. But to tell a 'decent' story and provide nothing on the level of what we had pre-Legion is a disappointment.

Thus ends the pre-patch, and now we have exactly one week until BFA launches next Tuesday.