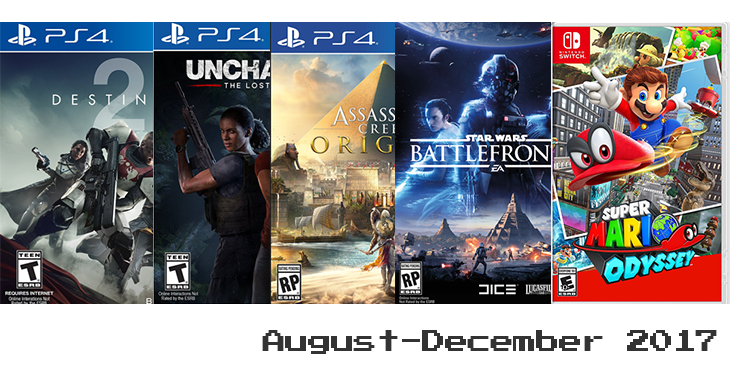 There are so many blockbuster games coming out in the next couple of months. This year is going by so far that many of them snuck up on me. I checked Amazon last night for something random I needed to buy, and then suddenly I realized all these games were releasing within months or even weeks. Why It's On My List
I fell in love with the Uncharted series only a few years ago. From the moment I actually (finally) sat down and played the first, I was hooked and quickly finished all of the games that were out. Last year, Uncharted 4 brought the end of the story line featuring Nathan Drake, paving the way for new Uncharted games to feature other characters. In The Lost Legacy, we'll be playing as Chloe and Nadine -- a very interesting combo. I'm eager to see how the gameplay and story play out. Why It's On My List
Graev and I played the original Destiny through the storyline. I enjoyed the game because of its co-op shooting experience, but didn't stick around for any of the end-game gear grind or "raiding" or multiplayer pvp gameplay. Destiny 2 is on my list to get if Graev takes the plunge. Why It's On My List
I love the Assassin's Creed franchise. Similar to the Uncharted series, once I played one of them (Black Flag) I was hooked and went back to play the entire series. I've been waitng for an Egypt setting for years! Super excited to see how they improve upon the AC franchise in Origins. I'm definitely hoping we see more holistic improvements and less emphasis on sub-systems. Advancing the story is also on my wish list. Why It's On My List
We are so, so long overdue for a good Mario 64-style platformer. I'm excited for two reasons: (1) It's on the Switch, and (2) It's going to have awesome graphics compared to previous Mario games. I'm apprehensive about the bizarre setting and real-world juxtaposition, but from what I've seen in previews there's still plenty of traditional Mario platforming. Then there's the "no game over screen" concept that fascinates me. Why It's On My List
Battlefront (the original re-release) was just 'okay'. In a way it was a big let-down from the memories of past Battlefront games. Battlefront 2 appears to be trying to solve the issues (one of which being those stupid tokens). I'm hoping for a reboot of their ideas. Something with more cohesive multiplayer. Something with better maps, objectives, and a better overall experience. Graev and I would definitely play together. This remains Pending until we get a little closer to release.

These are just a few of the big ones that I have on my radar and pre-ordered or closely pending a pre-order. Did I miss any on your list?