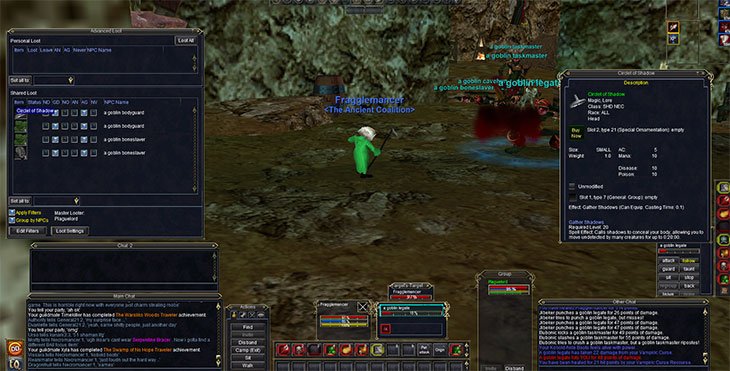 My friend and I had one goal for the day: Get the Circlet of Shadow.Â Circlet of Shadow is a clickable item that allows Necromancers and Shadow Knights to use Gather Shadows which is an invisibility spell. The trick is, if you get it within these first few weeks you get the “pre-nerf” version which casts the spell instantly. In a few weeks, the circlet will be nerfed (as it was back in the day) to have a cast time. 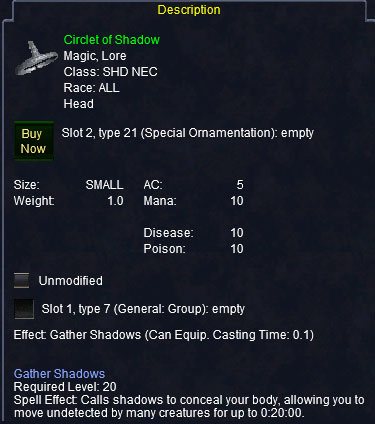 Within 30 minutes of arriving in Droga (the dungeon in Frontier Mountains where the Circle of Shadow (CoS) drops), we were lucky enough to get a Bodyguard spawn and get the CoS (rare drop).

As I write these we’ve been at war with a Wizard and her afk bot army. She got trained on for sitting in a stupid spot and held a grudge. Seeking vengeance, she brought out here wand of kill stealing (clickable nuke) and proceeded to jack some mobs and feel like a tough guy. Oh to be on a server where it’s a survival of the fittest environment. Daybreak doesn’t police anything with their skeleton crew.

In a fun way, this is what EverQuest is sort of about. Camping mobs (even ones that yield very little exp) to get specific items you want. In a few months, these will be absolutely priceless and fetch the equivalent of hundreds of dollars of in-game time via Krono (gameplay time tokens).

So we continue to press on and try to get a second CoS! If you’ll excuse me, my timer is going off for a wave of respawns.