Nighthold came out yesterday! KGC and friends took our dedicated group of 11 raiders into the new raid to test our skills against the normal mode bosses. Â Normal mode drops loot significantly better than even Heroic mode Emerald Nightmare, so it’s a no-brainer for us to move on.

We entered Nighthold and easily blew through all of the initial trash pulls. Wowhead has a guide that details what should be done with the different scorpions…. we sorta just ignored it and pulled all of the trash. Yay for normal.

The first boss — Skorpyron — went down with no trouble. The mechanics from the main tank perspective were a little annoying. I had to move 10 yards every 10 seconds. There’s a mechanic to hide behind crystals, but these were never in a place where I could realistically reach them. Tons of adds come if you get knocked back (which I did every single time) and overall it’s just about killing him when his vulnerability window comes up.

Second boss — Chronomatic Anomaly — was interesting. This fight is broken up into phases where things move normal speed, slow speed, and fast speed (get it? Chornomatic anomaly?). The fight is ridiculous easy on normal until the fast phase when he startsÂ destroying the tank unless the other tank swaps as soon as their debuff wears off. Fun and fast. 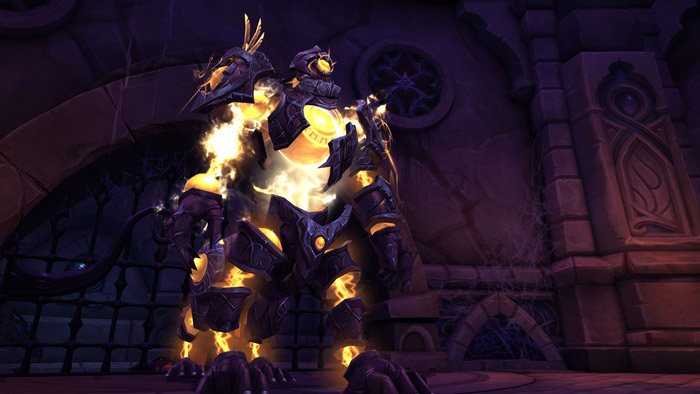 The third boss — Trilliax — reminds me of putricide from ICC. There are slimes and goos on the ground that make a mess. There’s an element of having to clean the stuff up to make room. We botched this one bad. We ended up never having space on the floor, and we ran around like crazy. When we downed the boss we ended up all getting achievements for doing the fight a certain way. Turns out we had no idea what we were doing and did an achievement run our first go. Yay us? We’ll be reading the guide for next time.

Fourth boss — Spellblade Aluriel — is where we wrapped up for the night. The three previous bosses were cleared in an hour, and then we wiped on Aluriel for an hour. She’s incredibly difficult. The fight feels like chaos until your DPS figure out the tradeoff mechanic. Then there’s the tank damage…. it’s basically a soft enrage. How many Annihilates can a tank have before they die? For me it’s 5. It’s this horrific feeling when you see Annihilate being cast and you’re like, “Guys, I’m dead in 3 seconds. Good luck.” We eventually got her down but it was hilarious — both tanks dead and it was a race to kill her before she killed the DPS. Definitely a cheering moment.

So far the raid is fun. The trash isn’t too annoying yet and the boss mechanics are neat. I’m really excited for Sunday when we go back in to finish the place.

The second trash pull of the night dropped me an 875 BoE cloak. I’m told I can make 100k on that! Woot, 2 months subscription!

I then upgraded THREE items this run, including a SET PIECE CLOAK! Super stoked about that.

This is the first time I felt strong as a tank. I’ve felt “okay’ in other raids, but this time I felt like my tanking ability was on point. I’m really looking forward to diving further into Nighthold!