Much like Toy Box Takeover, Disney Infinity: Toy Box Speedway is an expansion to the Toy BoxÂ of Disney Infinity 3.0. Instead of being a beat’em up, action rpg, or fighting style game, Speedway brings several racing modes to the game.

Speedway begins like everything else Disney Infinity by placing you in a central hub area designed to let you test out different vehicles. You’ll find a test track, half pipe, jumps, speed boosts, etc. This is where you can get your Tony Hawk on vehicle style and simply mess around.

When you’re ready to begin racing you can step up to one of three portals: Standard Race, Battle Race, and Time Trial.Â Standard Races and Time Trials are just your regular races you might expect. Nothing much to explain there. Battle races are like a typical Mario Kart level where weapons and powerups are available for pickup along the course. 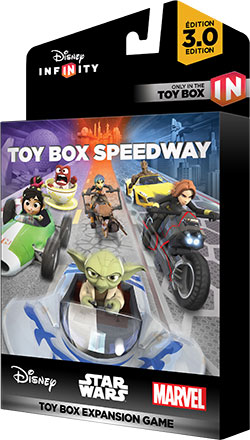 Like most Disney Infinity vehicles, driving is a little wonky. Drifting feels just a little bit off and sometimes when you think you’re doing everything right the game will think you’ve gone off the track–or will go off the track–and places you right back in the middle of the track. Really annoying when you’re in first place. In terms of your competition, the AI is ridiculously tough on the hardest mode. Any little slip up and you’ll never catch up to the lead car.

The variety of vehicles is strong. You can pick everything from a basic car to something out of Star Wars. Basically whatever you unlock in the Toy Box it feels like you can bring into the racing game. I liked playing as my Yoda figure and driving a Sand Crawler. Weapon variety is incredibly generic and forgettable. Powerups in general are a little bit of a letdown.

Courses are nice and varied. There are nine different tracks to choose from:Â Aladdin,Â Star Wars, Frozen, Guardians of the Galaxy, Big Hero 6, Wreck-It-Ralph, The Nightmare Before Christmas, Monsterâ€™s Inc.,Â andÂ Gravity Falls. While neat to look at the themes, some of the courses are incredibly straight forward. They’re plenty long, though, and some of them offer a surprising amount of ‘find your own way through the track’ opportunities.

Each course also has collectibles which was both neat to try and find them while racing but also annoying as Graev would be driving 10mph trying to find all of the tokens while the rest of us had already finished our laps 4 minutes ago. Speaking of collectibles, for the Frozen fanatics in your household you’re probably going to have to pick this up… Elsa’s Ice Palace is only obtainable in Disney Infinity 3.0 if you win the first place trophy in all 3Â Grand Prix races. You can also obtain neat things like Jack’s Spiral Hill from The Nightmare Before Christmas.

While not an amazing racing game on its own, the value proposition is just about right there with Toy Box takeover. For the completionistsÂ it’s a must-have, and kids will probably love it way more than adults.