Gamers — specifically Pokemon gamers — aren’t into traversing mountains, seeking out vistas, or exploring the world. They are definitely (especially in Asia) into the whole street pass thing where people carry their system around with them. I can’t tell you how many times I’ve seen a group of Japanese tourists at Disneyland all playing on their 3DS while waiting in line for rides. That’s a far cry from seeking out the experience of hunting pokemon by traveling to different locations.

Lastly, wearing the Pokemon Go Plus watch-like device to alert you when there’s activity in your area is neat, but as a 30 year old professional I’m not wearing that on my wrist all day. Kids will probably wear it at school before rules are implemented to prohibit them. I just don’t see people, especially the ages depicted in the video, sporting these devices.

Pokemon Go will be available in 2016 for Free with In-App purchases.

Another recent game launched for both phone and 3DS is a matching game called Pokemon Shuffle. Shuffle is one of those matching combat games. The more you match, and how you match, determines the strength of your attack. The objects being matched are Pokemon. You can equip 4Â Pokemon at a time and matching them delivers their various attack types and powers. 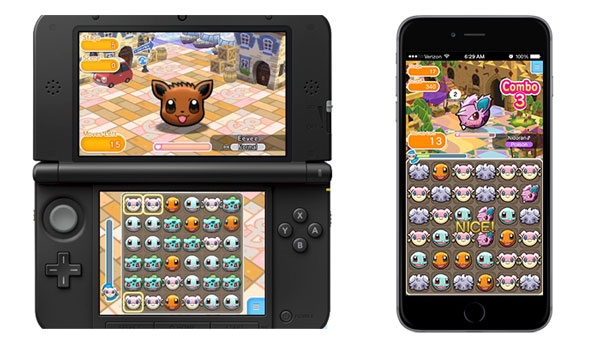 Gameplay is remarkably simple, and you are essentially guided down the path of which Pokemon to encounter and when.Â It’s fun in waves, and I’ve put in probably 2-3 hours of matching, but there’s simply not enough substance compared to other matching games that go as far as adding RPG elements.

Each battle has a limiting factor whether it be the number of turns (matching opportunities), time, or both. While matching 3 is the minimum, you’ll want to do much more significant matches and form match combos to defeat more than the simplest of Pokemon. Being able to move any pokemon from anywhere on the board means your freedom to match is huge, but you’re expected to make use of the freedom as the difficulty ramps up (especially on expert mode).

The most noteworthy element here is the price tag: $0. Shuffle is completely free. Scan the QR code there on the right with your 3DS and you can download it straight toÂ your device for free. How do they make money? Microtransactions, and not a very elegant implement.

The business model is Shuffle’s biggest misstep. You are limited to just a few battles at a time and have to wait real-life time to accrue battles again. You can buy more chances to battle in the cash shop if you like… but I have no idea why you would. They also sell plenty of other gimmicky upgrades. The time-limited play ruins my desire to play because I’ll often want to sit and play during my lunch break just to find out I was able to squeeze out only 5 minutes before out of turns.

Shuffle is definitely not Pokemon’s greatest entry, and Pokemon Go seems to already be aiming to miss the mark completely for me. I have higher hopes for what Nintendo and DeNA come up with for the franchise, but I won’t be holding my breath.