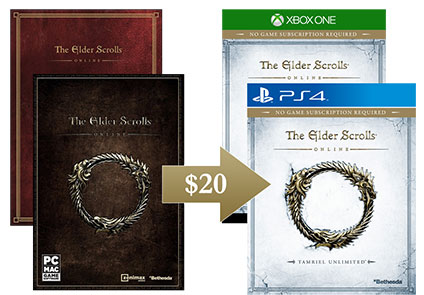 Last week Graev and I received emails from the ESO team offering us a promotional package to essentially take our characters from the PC version of ESO and move them to the upcoming console version. Included in this promotional offering was a copy of the game for the console of our choice (PS4/Xbox One).

Graev and I were already planning to revisit the now buy-to-play (B2P) ESO. We enjoyed ourselves a fair bit back when we played for a month of so after launch. ESO PvE wasn’t terrible — pretty fun, actually. The PVP sorta sucked, though.

The console version, being a full price game, isn’t worth it. Getting the game for $20 and being able to play it how it was originally meant to be played (with a controller) while sitting on the couch? Yeah, I’ll take it. The characters transfer doesn’t even appeal to me since neither Graev nor I care to pick up where we left off. We’re rolling a different faction, different characters, etc.

We’re going to play the PS4 version. I think the consoles and PC are separate servers, but I’m not sure if the PS4 and Xbox One are separated or play together. Should be a bit of fun.