Shovel Knight is probably among the best purchases I’ve made this year and is easily one of the more memorable experiences. It’s pretty sad when a $15 download title is just so much better and so much more enjoyable compared to a lot of hyped “triple-A” titles that have come out this year. I’ve actually spent more time playing Shovel Knight and other stuff like Papers, Please than I ever put into games like Watch Dogs. That’s mainly because Watch Dogs just wasn’t very good, but it also seems to be a growing trend with all of these big budget games turning out to be boring and uninspired while the smaller, and often independent, games shine so much brighter. I suppose it’s something that has been going on for a while now, but I never really took a whole lot of notice until recently. Anyway, enough about all of that and onto Shovel Knight! 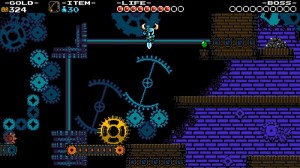 The whole concept of Shovel Knight is ridiculous and awesome or perhaps just ridiculously awesome. I mean, a knight that goes around fighting people with a shovel is just hilarious in its own right but the idea opens up some interesting gameplay ideas. Personally I would have loved to see some more elements that involved digging and some interesting secrets and puzzles to go along with it but at its core Shovel Knight is an action platformer first and foremost. I want to compare it to something like Mega Man but I don’t actually have a lot of Mega Man experience. Shovel Knight might actually be closer to, a lot closer actually, Duck Tales–even down to Shovel Knight’s ability to bounce continuously on enemies and certain objects with his shovel. There’s a lot more to it than that, however. In addition to bouncing and swinging your shovel you can also collect and buy various relics and upgrades throughout the game. There’s a wide variety of optional sub-weapons that you can acquire that not only help in defeating baddies but also provide some additional help in the platforming department by granting you the  ability to walk and travel over spikes or flight a short distance.

The overworl layout of Shovel Knight looks somewhat similar to Mario Bros. 3. All of the levels are connected by paths and in order to progress you need to defeat bosses to unlock the way through. There are also a few optional side areas where you can gather some extra treasure and even some wandering bosses. A few towns are also available and you can talk to NPCs and buy upgrades there. Each of the actual levels are themed to a specific boss like Mole Knight, Plague Knight, Propeller Knight, etc. This is what reminds me a little bit of Mega Man, especially since you get the option of a few levels at once and can tackle them in any order. Sometimes this can even prove to be helpful if there is a handy relic in another level that might make things easier for you later on.  The game is actually pretty difficult and you will die at least a few times be it from enemies or platforming. At the end I had 85 or so deaths so maybe I just suck. When you die you lose a portion of your acquired treasure and go back to the nearest checkpoint you reached, which can sometimes be pretty far away. Some of the treasure you lost will remain at the spot of your death in the form of floating bags and if you are able you can regain some of it. The higher treasure amount you have, which is what you use to purchase stuff and acts as somewhat of a score, the more you lose. 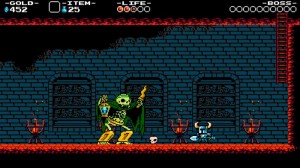 My first run at Shovel Knight lasted around 8 or so hours and that was only at about 97% item completion. A new game + option exists which lets you carry over all your stuff into a harder version of the game and right now I’m working through that. A form of achievements also exist called Feats. Some of them are fairly easy while others are just straight up crazy. I mean, complete the game without dying? Don’t fall into a single pit? That’s just crazy but that’s another cool aspect about this and games like it. You can really make it as hard for yourself as you want by trying to beat the game without getting any relics, by destroying the checkpoints for money, trying to beat it in under 90 minutes, etc. All of which also have an attached feat.

Shovel Knight is a fantastic game and one that I wish could just keep going on and on without end. If you have a Wii U, 3Ds, or PC then you really need to check it out. The visuals are incredibly charming and the sprites are just awesome. The music is catchy and there is actually a lot of good variety to it. Plus the game is just loads and loads of fun. Support Shovel Knight and maybe we will get a sequel if we are lucky.