My experience with the Oddworld is almost nonexistent since Keen and I never owned a PS1, which means we missed out on all that cool stuff. It was one of those really neat looking games that I never got a chance to play, like MediEvil and Crash Bandicoot. Later on I did get to play it for a bit at a friends houseÂ andÂ I played the PC demo a lot. Oddly enough a lot of Abe’s gamespeak has stuck with me over the years like the way he says “Hello,” “Follow Me,” and “Okay.” I still pull those out every now and then. A few years ago I triedÂ to get the first two games on Steam but eventually gave up after way too much trouble getting them to work. Anyway… when I found out that a remake of Abe’s Oddysee was happening I was pretty excited to get to play the game for the first time. Well, almost those first time anyway. 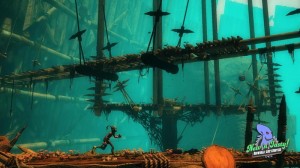 What Is Oddworld: New ‘n’ Tasty?

Oddworld: New ‘n’ Tasty is a puzzle platformer. You take control of a Mudoken floor-waxer named Abe who overhears a plan to turn Mudokens into meat products. From there you make your escape from the RuptureFarms meatpacking facility while rescuing as many Mudoken buddies along the way as you can manage. Soon after that Abe pretty much falls backward into the role of fated savior of the Mudokens. It’s fascinating stuff and it’s told with a lot of rhyming.

Abe is a pretty weak dude. There’s not a lot he can do other than run, jump, duck, roll,talk, and throw stuff. He can, however, perform a mystical Mudoken chant that will turn birds into portals and take over the minds of Slig guards. I’m not entirely sure why Abe can do this or if only certain Mudoken have the power but I guess that’s not really important. When making your way out of RuptureFarms you will need to dodge various security measures, slig guards, and several nasty ways to get killed like mines, pits, and grinders. When you encounter fellow Mudoken slaves you can chat them up and tell them to follow you. Upon finding a ring of birds you can chant open a portal for them to escape through. They’re not terribly bright though and they will run into hazards if they aren’t cleared and if there are sligs around they will get gunned down.

The platforming elements are very good and the controls seem very tight. I can’t really recall a single death that wasn’t my fault. What I really like about this game is how well it works as a speedrun game. The way Abe moves actually reminds me a lot of the original Prince of Persia game. The way he runs and jumps, hangs and rolls, etc. Actually a lot about this reminds me of PoP and I wonder if that game was influential at all or if it’s just coincidental. Unlike PoP there are quite a few nasty bad guys that want you dead. Sligs will gun you down, paramites will follow you and attack in numbers if cornered, scrabs will run you down but will fight each other, and slogs which just want to chew you up. Elum are pretty cool dudes however and will let you ride on them in some portions of the game. They run faster and jump much farther than Abe can on his own.

You will face a lot of hazards on your adventure. Not only do you need to worry about falling down pits and the local wild life but also mines, floating bombs, rolling boulders, grinders, and electricity fields. Here’s where a lot of the puzzle elements also come in. You have to sneak around bad guys to pull levers to disable stuff or open areas and try not to get gunned down. Sometimes you will have to do all of this while worrying about fellow mudoken buddies who might get caught in the crossfire. Other times you will just have to worry about remembering a a mudoken whistling password or how you are possibly going to run through this area, activate what you need to, and make it back without being killed. It’s fun stuff.

So as I mentioned before, my experience with the original game is limited. However I have noticed quite some big differences between each version. Firstly, and most obviously, the game looks and runs a lot different. New ‘n’ Tasty looks visually very impressive while still capturing the aesthetic of the original game. It’s actually pretty interesting because while playing the game it felt like this was what the old game looked like but after tinkering around in my Steam version of the original I saw that was very much not the case. So either they did a very good job at recreating the original game or I just have a very bad memory of what old games looked like. In addition to the impressive visuals the game also runs a bit differently. The game screen actually scrolls as you move rather than changing screens every time you get to edge.

Another big addition to New ‘n’ Tasty is the inclusion of three difficulty levels: Easy, Normal. and Hard. I imagine Hard probably resembles the original game the best but the other difficulty levels are great for people who might have thought Abe’s Oddysee was too much of a challenge. Probably one of the biggest changes added in New ‘n” Tasty is 200 additional Mudokens that you can rescue which brings the total to 299. That’s a whole lot of dudes to rescue. I thought I scoured the levels but I was still only able to get 175 at the end of the game. There are also several different kinds of leaderboards for anybody who really wants to compete on speed running and saving mudokens.

The only real negative change that I have noticed involves jumping while standing still. In the original game you can jump forward just by pressing a button. In New ‘n’ Tasty you will have to also press forward or else you will just jump upwards. That was a little annoying at first, especially since pressing forward and jump at the same time didn’t always seem to work for me. However not long at all in the game I figured out you can press jump first and then quickly push over on the stick and execute a standing side jump 100% of the time. It’s a small complaint, and really my only one in the entire game. Even then it doesn’t seem like anything that couldn’t get patched. Even if it doesn’t it’s not that big of a deal. 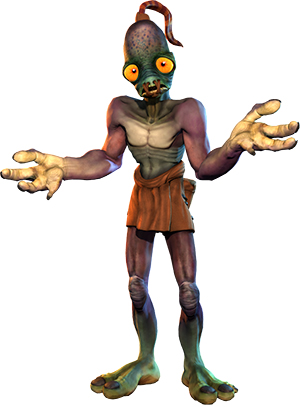 Should YouÂ Get It?

Yes. Yes you should. This is coming from the perspective of somebody who hasn’t played through the entire original game before, though. Even so I can’t imagine old fans not wanting to play this just to see the new additions. Even if you mastered the original game there are 200 more Mudokens for you to rescue this time around and the game looks and plays better than ever. I got 7 or 8 hours out of my first run through and I plan to go back and try to do it all over again–and rescue more buddies along the way. Oh, and it works GREAT with remote play on the Vita. I played through about 1/3rd of the game that way, but the game is cross-buy/cross-save anyway so when the Vita version comes out you can just use that. So yeah, support the game and hopefully New ‘n’ Tasty does well enough that we get a remake of Abe’s Exoddus and even some new Oddworld games.