Keen and I have been continually playing Swap Force and building up our collection. We figure we’d share some of our thoughts on the other aspects of the game not mentioned in our prior review along with some of our favorite characters.

This side mode is a new addition to the series and a much welcomed one. There are three different kinds: Solo, Team, and Competitive. Either way you’re basically surviving in an arena and fighting off hordes of bad guys rather than beating the tar out of each other. It’s pretty much your typical Horde mode but there are additional power ups (and curses) that can positively and negatively impact your bouts.

Throughout each match your score multiplier increases steadily as long as you aren’t hit. It’s actually a pretty decent way to gain some experience on the side along with a small bit of coin. It is, however, quite hard on the higher difficulty modes where enemies can take half of your HP in one hit. This makes playing anything without a decent dodge maneuver pretty screwed and Giants are just much larger, slower targets which makes them almost useless. Still, it’s something that we enjoy more than just regularly fighting each other and the varied arenas filled with different hazards make it an exciting experience from place to place.

We currently have 10 or so of the new swappable figures and each of us has started to favor some over the others. Here are some of our picks: 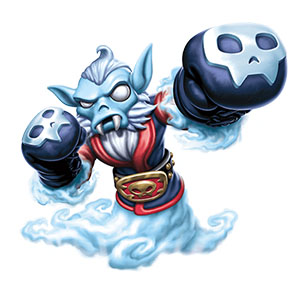 Night Shift is among my favorite of the new Skylanders. He’s pretty much some kind of vampire boxer. His upper piece utilizes punching combos and a vampiric bite that can be used to restore your hitpoints. Charging up his punch allows for a strong and quite comically large uppercut that can be upgraded to net you more money.Â  I usually choose to leave him attached to his original base because it allows for much better maneuverability, especially since punching roots him in place. His base piece allows for VERY quick teleports than can be upgraded to shoot projectiles. It’s really fun to “poof” in and out and all over the place and lay the smackdown on baddies. 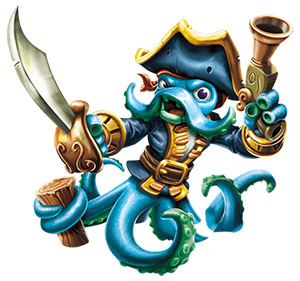 I love water types and this is definitely right up my alley. Wash Buckler is a pirate themed octopus dude with a tentacle leg base. I’m not overly fond of the base, which does decent damage with tentacle slaps and lets you dash-roll around. The top piece is really awesome, though. His main attacks utilize his sword which can also be charged up for additional damage. His alternate attack fires bubbles out of his pistol which encapsulate and immobilize bad guys. Later on you can upgrade the bubbles to contain piranhas that deal damage over time to enemies.Â  I took this a step further by choosing the upgrade path that lets me shoot TWO bubbles out which can trap many enemies at once and each bubble is filled with a swarm of piranhas. Wash Buckler makes crowd control a breeze. 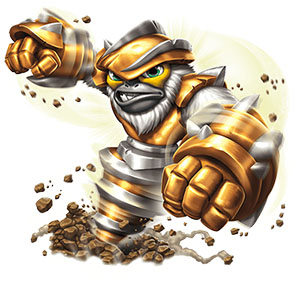 Grilla was my first pick.Â  I saw him and immediately wanted him.Â  He’s all about punching enemies with his top half, and drilling into the ground to plant turrets with his base.Â  I was slightly disappointed by the base because I thought he would drill around the map or rely more on his drill, but in the end he’s become a very balanced and effective Skylander.Â  His turrets are decent.Â  I picked the ones that splash damage to nearby enemies, but probably should have gone with the rapid fire banana shooters.

As if one big ape wasn’t enough, Grilla can call little monkeys to do battle for him. These moneys are sent out in a wave and smack around a few things before disappearing.Â  All-in-all, he’s a decent Skylander with a really neat vibe. 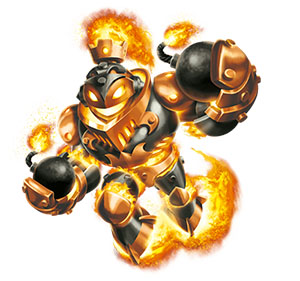 Blast Zone is my new favorite Skylander.Â  At first I thought he would be this generic guy who throws bombs.Â  After all, he came with the starter pack so I figured he was just one of the Skylanders Activision had little faith in selling.Â  Turns out, he’s friggin amazing.Â  His top half is all about bombs and fire.Â  Blast Zone can spray fire in front of him that I can control to make a circle around myself.Â  When I throw bombs through the fire, they catch fire and do even more damage.

His bottom half is all about zooming around with fire rockets spreading fire and ramming into enemies.Â  The ability to travel quickly allows him to get out which is great on the hardest difficulty where one hit will take a huge amount of health.

Being ranged, AoE-centric, durable, and able to move around quickly is the perfect blend for a Skylander.

The Future of Skylanders? ONLINE!

We’re sure everybody who has ever played these games has wished for some kind of online mode. Fighting against other players online seems to be a no-brainer. People love min-maxing pokemon and battling online so why can’t this take off in a similar fashion? We both get super excited when we talk about all of the incredible things they could do with this game online. Maybe even an online MOBA-inspired battle mode? That would be incredibly awesome.