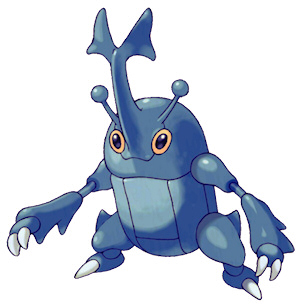 So the first thing I had to do was pick something to breed. I ended up landing on a Heracross because he looks like a happy badass and has an interesting Mega Evolution and new ability. The first thing I did was to catch one in the wild and drop it off in the Pokemon daycare with a Ditto, your all-purpose breeding Pokemon. My goal was to breed a Pokemon that had a very specific nature. Natures give a bonus to one stat and a penalty to another. There are also neutral natures that don’t do anything. I was specifically looking for a Jolly nature (+Speed/-Sp.Attack) but with 25 or something different natures it would take quite a while. Especially since you have to run around until an egg shows up and then run around even longer until it hatches. There are ways to speed up the process but it can still take forever. Eventually I gave up on the RNG and just found a bug pokemon in my bank that already had a Jolly nature and belonged in the same egg group as my Heracross. In order to pass down a nature you can have the parent hold an everstone. Makes the process so much simpler.

So now I had the Heracross with the correct nature and I needed to breed one with perfect IVs. What are IVs? I have no freakin’ idea. I think it stands for Inherent value? Anyway, it has something to do with the base level of your stats. Supposedly 31 is the max but I have no idea where people get the number from. After doing some research I found out that you basically show off your pokemon to some dude and he will tell you how good its stats are. If he says something like “Stats like that can’t be beat!” then they are perfect IVs. The easiest way to get some perfect IV pokemon is through the Friend Safari. In the post-game city there is a Pokemon Safari but the only way to access it is if you have people on your friends list. Each friend has a random area to access with a certain type. Two of them are usually more common types while one is supposed to be more uncommon or rare. You can find cool stuff like starters, etc. Mine is a normal with Chancey, Audino, and something else. At least that’s what people tell me since you can’t go in your own Safari.Â  Anyway, apparently the pokemon caught in the Safari already come with two perfect IVs. The easiest way to breed perfect IVs is to find somebody with a Ditto Safari and then catch a mess of Dittos. I think I got 12 or something with a mix of different perfect IVs ranging from 2-3. You take them over to the IV Checker dude, rename them after their perfect IVs for ease, etc. Really the hardest part so far is finding somebody with a ditto safari who will exchange friend codes with you.

Now I had my Dittos and I proceeded to breed them with my Jolly Heracross. The ditto held an item called a Destiny Knot, which I can only assume helps pass on IVs, while my Heracross kept the everstone to pass on its Jolly nature. When I got a baby that had 2 perfect IVs I would then swap the ditto (and knot) and breed it with the new Heracross, who also now holds the everstone. You kind of do this over and over again until eventually you get a pokemon with four perfect IVs. The process can take a while and you will end up breeding a bunch before you get one. Eventually I got two Heracross with four IVs each (Though one had two different from the other) and bred them together until I got one with 5 perfect IVs. I don’t think you necessarily have to get all 6 of the IVs perfect as some are more important than others, but you pretty much have to keep doing this if you want all of them. Personally, I stopped at five because it covered all of the stats that were important for me. 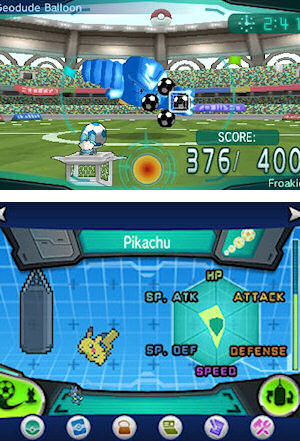 Now that I had a near perfectly bred level 1 Jolly Heracross the next thing I had to do was handle his EVs, which I assume means Earned Value or Effort Value or something like that. From my understanding they control the stat spread of your Pokemon. I think in past games the only way to EV train was to somehow keep track of these hidden numbers and raise them by either using specific items and battling certain pokemon. Like fighting a Pikachu might give you 3 EVs in speed. That’s probably not true though, so don’t quote me on it. Each Pokemon can’t get more than 500 EVs, which is enough to max two stats and toss a couple in something else. You have no idea how happy I am that I don’t have to do this.

Thank the PokeGods for the invention of Super Training. It’s a minigame type process located on the bottom screen where you play specific minigames focusing on certain stats and earn points for them. You can also earn special punching bags that increase your points, make the training faster, etc. Since I was going for max Attack and Speed all I had to do was play their respective Super Training levels until each stat was maxed. The whole process took maybe an hour.

After many hours of research and work I now have my ideally raised Heracross. I don’t know how much of a difference it will make but it was definitely an interesting process to go through. I’m not sure if I want to do it again, but if I do it would probably all go a lot faster. It’s just nice to know that if I wanted to play competitively then I could manage to raise the Pokemon to do it, and really that’s all that matters to me in the end. Although trying to breed a SHINY pokemon with perfect IVs might be interesting…