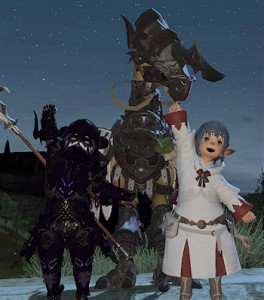 We finally made our way to level 50 in Final Fantasy XIV!

The journey was actually pretty dang good for a themepark.Â  You know how we feel about Fates and quests — they are ‘okay’.Â  Fates are a bit of a exp pinata grind, and quests are the typical fare.Â  There were many distractions along the way such as a Hunting Log which allowed us to gain experience for killing specific mobs, plenty of dungeons, and a really interesting story woven into all of the above.

I would say the leveling experience — -judging FFXIV for what it is, all things considered — gets a solid B+ from me.

Like most themepark MMOs, a lot of the game in FFXIV technically begins at the max level.Â  Now it’s time to complete the relic weapon quest, which is actually closer to what I would consider a true quest than any other quest in the game.Â  This requires finishing the main story, completing a few dungeons, gearing up to the point where we can tackle the primals on hard mode, and obtaining a special weapon.

Lots of dungeons open up, and a minor gear treadmill begins.Â  Dungeons can be run for a sort of currency that is used to purchase items — a system I much prefer over random drops.Â  This gear looks great, and will allow us to advance into even harder content.

The first big patch is on the horizon.Â  In patch 2.1 the following things are being added:

That’s a significant boost to the game’s feature list, and I love how there seems to be a little bit of everything.

Our Keen and Graev Community Guild, Rhotano Company, is doing extremely well.Â  We have a great spread in levels ranging from level 10 to 50.Â  We’re running dungeons together, saving up tons and tons of Gil for a guild house, and have some fantastic plans for our future in FFXIV.Â Â  We’ve played a lot of games together over the years, and our group hasn’t been this settled into a MMO in a long time.Â  That bodes well for our future as a guild in FFXIV.Â  If you’re looking to join a community enjoying FFXIV, we are recruiting.

We’ll keep you all up to date on our progress through the FFXIV end-game!