In State of Decay you aren’t just looking out for yourself. Sure you can run around killing zombies and collect useful weapons and supplies but you also have to help take care of the people holed up in your home base. This means keeping them stocked with food, medicine, ammo, construction supplies, etc. The numbers tick down every day and while I’m not entirely sure what happens if you run out, I do know that it obviously can’t be a good thing. You will also need to use these resources to upgrade your base and create various objects. The tricky part is that supplies don’t respawn so after you’ve already looted all the surrounding houses and sacked the local diner you are kind of a little screwed, forcing you to move on. It kind of creates the feeling that you aren’t necessarily trying to win so much as trying to hold out as long as you can before you lose. 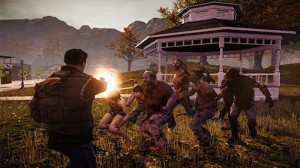 You can switch between specific survivors, and actually need to as they become tired after spending so much time exploring. Some characters might have stronger skills in fire-arms or leadership than others which offering some different bonuses. You can also raise these stats over time which can unlock additional benefits and abilities at higher ranks. The combat seems to be pretty simple. You pres X to attack ,hold left trigger and use the right to shoot. It gets more complicated from here, though. Tapping B dodges, holding B ducks, LB+X seems to be a strong attack, LB+Y is a finisher if zombies are down, and only pushes them if the zombie is standing, LB+A is some kind of jump kick with both legs, and LB+B when coupled with the correct situation is supposed to allow you to suplex and insta kill guys. I never got that last one to work, though. Despite being complicated, you’ll get used to the controls; State of Decay is like Dead Rising when it comes to melee combat. The shooting mechanics aren’t so bad either but I rarely use guns as they seem to draw more unwanted attention.

The whole “draw unwanted attention” aspect is something I find interesting. Almost everything you do makes noise which can potentially draw in more zombies. Even looting houses can be incredibly dangerous if you don’t take it slow.Â  Being loud and drawing in large crowds of undead that choke off your exit points is an awful idea. The whole sound and light bit can work in your favor though with stuff like flares, firecrackers, and alarm clocks which can divert a horde and allow you to safely pass. That’s actually another interesting aspect of the game. I’ve never played a Zombie game where stealth might actually be an important factor.The game world is pretty big so trying to sneak around it on foot would take a long time, not to even speak of being incredibly dangerous. Fortunately there are cars all over the place which you can use to get around. Just make sure you don’t wreck them or mow down too many zombies or they will start to break down. 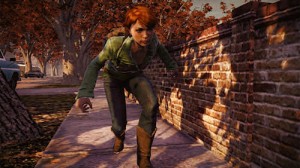 I’m not sure what to think about State of Decay. Don’t get me wrong, I do enjoy playing, and the game is definitely worth buying, but even after playing it for hours I don’t seem to get anywhere or accomplish anything. I try to juggleÂ  resources, help out survivors, and do missions but it all feels a little inevitable. I can’t even take a break from the game because even when I’m not playing the game continues to simulate stuff. You might start it up a day or two later and find your supplies are almost gone, people died, and items you left in the communal stash have been jacked by somebody. This hopeless feeling is most likely what they were going for, and if so they did a fantastic job. I mean, the title says it all, right? State of Decay. Even though I personally think it should be called “Jacking Graev’s shotgun from the stash and replacing it with a tree branch.” Seriously, screw that guy…