The demo for The Wonderful 101 showed up recently, and after playing through it a few times I’m already hooked. Nintendo’s latest Direct already did a pretty great job of getting me hyped for the game and I’d really recommend watching it if you haven’t already. 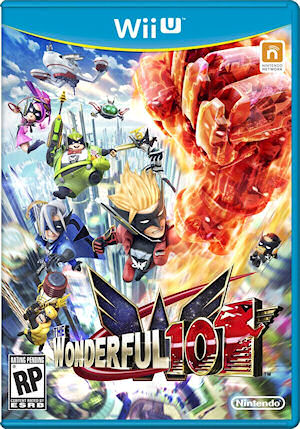 The game is really difficult to describe. You play as a team of heroes and battle against an invading enemy force by combining your numbers into various large-scale weapons like fists, swords, hammers, guns, etc. The more heroes that form into the weapon, the stronger it is. Your heroes can also form together into stuff like hang gliders and ladders to overcome environmental obstacles or form into a giant gelatin to bounce attacks back at your foes. It sort of feels like some kind of combination between Pikmin and an action hack ‘n slash like Metal Gear Rising or Bayonetta.

In order to form these weapons you need to draw different shapes using either the touch screen on the gamepad or the right analog stick. It’s a little wonky at first but once you get the hang of it things work out rather well. Drawing a circle creates a fist, a line for the sword, a wavy line for a whip, right angle for a gun, etc. You can actually create up to five or so of these and chain together some pretty awesome combos. So far this aspect of the game seems to be dividing players. Many have no problem with it but others, even major game sites, can’t get it to work right and just seem to dislike it. Honestly though it’s not that difficult to get a hang of if you put in a little effort.

The game is fascinating to watch. The visuals are bright and colorful and they created a really neat style. Up close the various characters have a curious sheen and somewhat doll-like appearance. It reminds me a lot of older television shows that used puppets like Thunderbirds. The demo doesn’t really convey anything in terms of story but if you watch the trailers it’s very reminiscent of older shows like that and power rangers, at least I think so anyway. It definitely seems like it will be a good time.

The game comes out midway through September, and I’m now eagerly looking forward to it. The Wii U has been traversing some bumpy roads lately but with big releases like Pikmin 3 and The Wonderful 101 things are starting to look up.