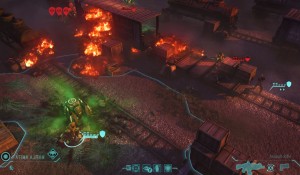 Read more after the break.

XCOM: Enemy Unknown really requires thinking before taking action.Â  A RNG (random number generator) is affected by elevation, kind of cover the enemy is behind, accuracy of your unit’s aim stat, the weapon in use, and any sort of items that unit has to enhance his aim.Â  I don’t know what to think of the RNG.Â  A lot of people complain that it isn’t fair and that you miss 97% shots, but some super low percentage shots are made easily.Â  The best thing you can do is set up your units in the best possible way to give them the best shot, and use tactics that make sense.

Gameplay happens in ‘missions’ that you are sent out on.Â  I’m fairly certain that an element of randomization is at play here; The missions you go on and where aliens are at the start aren’t always the same.Â  So if I’m monitoring activity and see a UFO flying over my territory I can intercept it with one of my aircraft to shoot it down, and from there I can deploy my team to the wreckage to go on a mission.Â  There are missions where my troops have to escort and/or save civilians, missions to stop enemies from destroying things, and missions where the goal is to go out and capture aliens alive to bring back to the base for interrogation and research.Â  When going on out missions, alien tech and resources can be used to upgrade back at the base.

I don’t know how hard it is on easy or normal, but I’m playing on classic mode with iron man mode so I can’t save and reload if I make a bad decision, and if my people die they are dead.Â  The game can be extremely difficult, and I haven’t won the game yet.Â  I’ve started three or four times, but I’m eventually wiped out or enough nations leave the XCOM to cause me to fail.Â  While difficult, it’s still a ton of fun.

There is also a multiplayer mode where you get a pool of points.Â  Purchasing a unit may cost points, equipping him costs points, and you can even use alien units.Â  Once you’ve used your points you can fight someone else who has done the same thing.Â  It’s not my thing, but I can see a lot of people enjoying this sort of multiplayer battle.

I’ve streamed a lot (check out this 4h 30m stream I did), and plan to play a lot more.Â  I highly recommend XCOM: Enemy Unknown, and I hope we see a lot more games like it in the future.