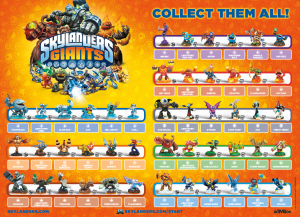 It’s been around a year since the launch of Skylanders, and I finally finished collecting all of the first gen. I knew it would take off when it first came out because the game is not only fun but collecting all the Skylanders has a really cool toy/collecting element.Â  The figures themselves are really neat too.

Both Keen and I are excited about Skylanders Giants coming out on the 18th of this month.Â  The new site recently went up showcasing the Giants.Â  They look great, and I’m anxious to see how they’re worked into the game.Â  There are 8 Giants,Â  8 Lightcore, and something like 8 new Skylanders plus a few returning.Â  Lightcore figures are special. When put on the portal the light shines through them giving them a neat luminescent look, and they also have special abilities.Â  The returning Skylanders are in new poses, and are able to level higher than the cap of the previous game to get new special powers.

Even though Skylanders is a game designed for kids, and that’s definitely their target audience, it would be nice if they gave an option for increased difficulty.Â  While there are some difficult spots, it would be nice to have a little more challenge across the board.Â  Going along the same thought, I think harder or more complex puzzles would be nice.Â Â  We both wish there was an online battle component, or online multiplayer.Â  It would be really neat to play online, since Skylanders supports co-op play so well.

Given the popularity of the first game, it’s a given that the second generation will be sold out well in advance of the holiday season.Â  You’ll need to decide quickly between the Portal Owner Pack since it’s cheaper if you already have the first game, or the Skylanders Giants Start Kit which comes with two regular figures plus a giant.Â  Technically the starter kit makes buying more Skylanders difficult/expensive because you’ll end up getting duplicates in three-packs (which are cheaper than buying individual figures).

Since so many of you showed a surprisingly high level of interest in my posts about the Skylanders, I’ll definitely keep you updated with my thoughts on Skylanders Giants.