Digging around in the garage before heading back up to school, I uncovered a massive treasure trove of old games.Â  I found boxes marked “N64”, “Consoles”, “Nintendo”, “PS”, and “Game Stuff”.Â  Inside were stacks of stuff like this: 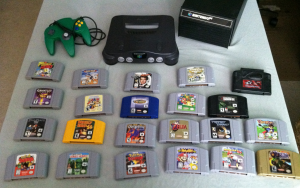 A crazy rush of nostalgia came over me.Â  I was looking at the original Super Nintendo Entertainment System games like Super Mario World, Donkey Kong, and Mario RPG; Dozens of different games. Then the N64 games with the original Golden Eye, Majora’s Mask gold cartridge with the holographic label, Quest 64, and the best ever Harvest Moon 64.Â  So many hours — countless hours — of fun in that picture on the left.

Then I fount Graev’s older Gameboy game collection.Â  Graev has about 10x the number of games in that picture already in his secret hiding place, but this box was the special one he was missing.Â  One of those games, I think it was ‘Bad N Rad’, I found on the streets of Australia while I was on a student ambassador trip back in the 90’s.Â  I have memories of Graev playing those while our family took trips all up and down the East Coast.Â  While we would all look at the trees of Vermont or Niagara Falls, Graev would be finishing a new game.Â  Crazy memories!

Reminiscing over every game pulled out of the box … I miss those days.Â  I think I enjoyed games more then.Â  I appreciated them more, at least.Â  Each one was special.Â  Each one new in its own way, some even transforming the gaming industry into what it is today.Â  Nothing was taken for granted.Â  I think that’s why we kept it all, — every console, every game.