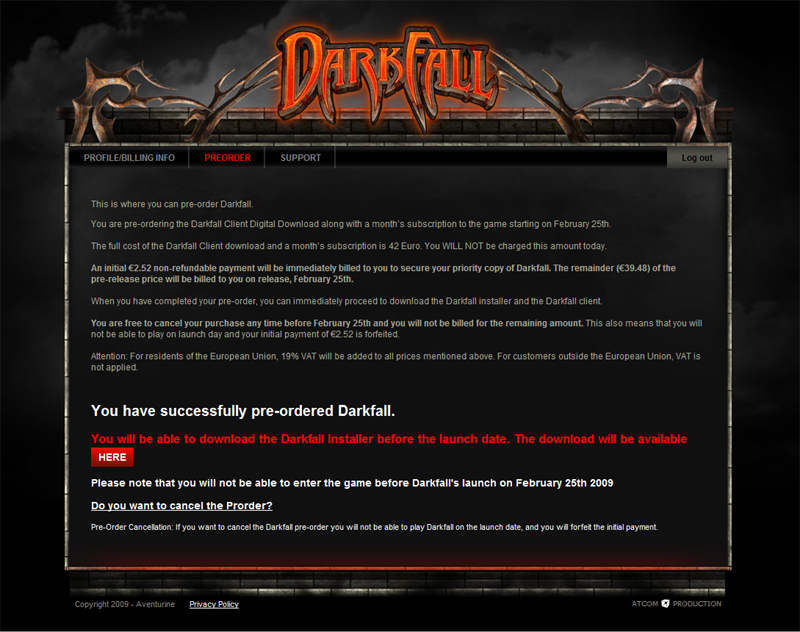 It only took me ~ 6 hours and 19 minutes of refreshing.Â  Okay, so I went afk twice to eat meals and played some Warhammer Online on the test server to check out the Choppa but I was refreshing every time it timed out.Â  If you’re not aware of why I had to spend so much time, apparently the interest in Darkfall has surpassed all of Aventurine’s expectations.Â  As a result their web server has been crippled all day right after the link to pre-order was leaked.

Here’s what Tasos from Aventurine had to say:

“The Pre-Order structure is being hammered beyond any possible expectation. There’s an impossible number of connections per second even now. We are seeing 20 times the traffic estimated. Our web servers are able to handle quite a bit of load, even so, they are currently taxed to their limits. This wasn’t anything we could have reasonably anticipated.”

Understandable.Â  I don’t think anyone can truly be upset over something like this – although I’m amazed at how many people actually are…

Taking a step back and really thinking about it, which is worse? “We don’t have enough interest in our game” or “We have too much interest”?Â  We’ve seen what happens in both situations and how it can drastically affect a game.Â  The latter is far easier to remedy.Â  It’s actually an awesome problem to have in the grand scheme of things.Â  The only thing that bothered me today was this thought of them running out of pre-orders looming over my head.Â  I could wait a few days or a week and not really feel bothered if that’s how long it took them to get things up and running.Â  The idea of people getting their pre-orders though and possibly missing launch is what kept me going.