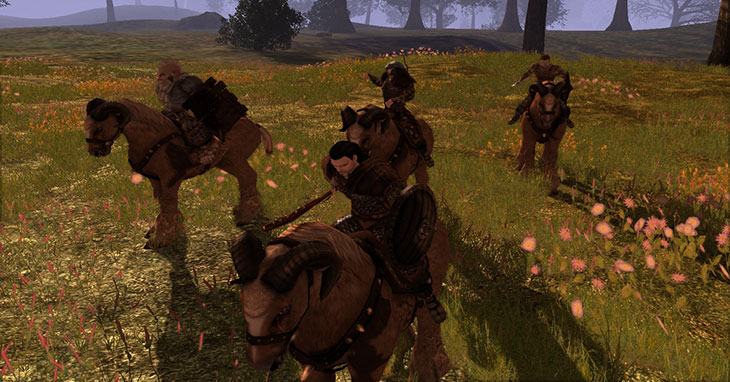 Continuing with the screenshot memories, I found another screenshot on my hard drive that I want to share with you guys. This one is from the original release of Darkfall…

You may recall that I mentioned there was a Darkfall revival project underway, but at the time they hadn't yet achieved a license agreement with Aventurine. Apparently things are moving…

I get contacted by a lot of people who want me to check out their game, republish their press release, or somehow how let them piggyback on whatever small amount…

Darkfall Unholy Wars comes out day after tomorrow.Â  At least... we think it comes out tomorrow?Â  No one has heard a word from Aventurine.Â  Why is there such a communication…

Darkfall has made some waves within its pond by announcing some changes to guild ranks.Â  Basically, ranks you would normally assign to players are gone.Â  Think of those ranks like…

Darkfall Unholy Wars supposedly launches early December.Â  I say supposedly because I believe we won’t see it until at least January.Â  Nevertheless, information about the changes to Darkfall is finally being offered up by Aventurine.

I really, really like the look of the new UI.Â  I have no idea how it will actually behave when playing — I may despise it when I actually get to experience it.Â  I think visually it conveys a more action-like approach with radial menus for combat abilities, almost console-like menus, and a much more polished and informative GUI.

In particular, the Bank interface looks to be vastly improved.Â  I wasn’t a fan of the chaos created by the random, throw yourself anyway bank space.Â  The new paper doll looks good, and I like the general aesthetics of how information is being presented to the player.

The Feats sound to me like an achievement system and quest blend.Â  The game will suggest these objective-like tasks and the player can choose to complete them or not.Â  Look at the screenshot I took from the video, it looks like everything from exploring a town to killing monsters, crafting, PvPing, sieging, and just about every aspect of the game will give points.Â  I see a colored point value next to each Feat; I’m not sure if those are general Player Points or special points of a particular type matching the type of Feat.

I think Feats will give players direction.Â  One complaint I often hear from inexperienced sandbox players is, “What do I do next? What is my goal?”Â  This will provide that goal in an open way that will hopefully maintain the spirit of the sandbox game.Â  If these become more like chores that become required by the min-max meta game to be competitive — meaning the points associated become important — then the system will be a failure.

Player Points appear to be the equivalent of experience.Â  They are used to buy new skills, boosters ( Titles with stat bonuses), and yet-unnamed “features” that allow you to develop your character further.Â  As I mentioned previously, Feats reward you with points, and simply playing the game however you want is supposed to reward you with Player Points.Â  Crafters can earn them by crafting, PvPers from killing other players or sieging, etc.Â  Sounds like this could work.

Overall, Aventurine is finally taking steps to modernize Darkfall.Â  I like the game I’m seeing on paper, and I’m anxious to get my hands on these changes to know for sure whether or not Darkfall will be worth investing my time. END_OF_DOCUMENT_TOKEN_TO_BE_REPLACED

Well, I'm going to give Darkfall another try.Â  I can't say it's because Darkfall suddenly deserves being played again or because I missed the game.Â  I'm simply curious about the…

I've been thinking about this topic a lot lately: Should MMO's reboot more often?Â  When I say reboot, I'm talking about the same type of reset we see when a…