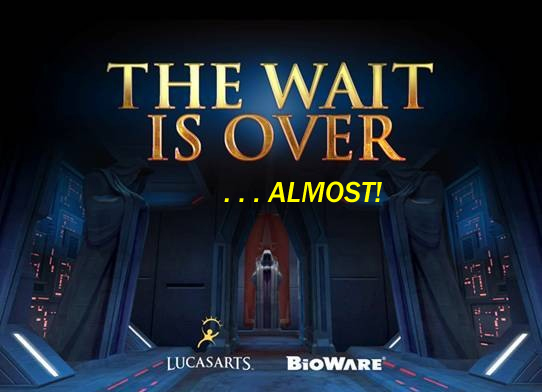 A not so long time to come, in an announcement half-already made…

We’re going to get the ‘official’ announcement that Bioware and Lucasarts have tied the knot to make a KOTOR mmorpg!Â  I’m actually really excited about the potential here, despite my dislike for the actual KOTOR games.Â  I could never get into the combat or the style of the games, sorry.Â  Graev’s a fan though.Â Â  Hopefully they don’t remain tight-lipped about the mechanics of the game for long.Â  I want to know right away whether or not it will be worth following the game.

I’ll be looking for certain ‘tells’ in the announcement and as the development of the game progresses I’ll be looking for whether or not it’s going to be a flop or a success.Â  As always, I’m getting my hopes up that this one will go the distance and ignite a mix of DAOC, SWG, and EQ for me.Â Â  I don’t know why I do it to myself – I really don’t.