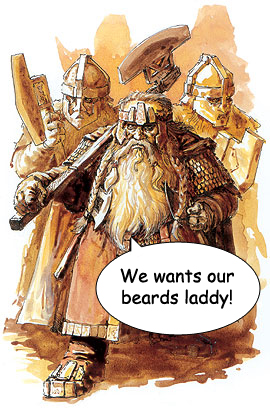 A few posts down you’ll find a bunch of links to videos from the Paris event. All of them are pure gold. The one I found most interesting was the Q&A w/ Jeff Hickman where Jeff is asked questions by the press in a small room. It’s very casual and laid back and the questions are about anything and everything. The setting allowed for Jeff to sit back and be real, or at least as real as his job will allow him to be with an NDA. During the interview Jeff answered a few questions which revealed the following:

– Changing appearance as you level won’t make it into the game.

– Dwarf Mounts are the only mount that hasn’t been decided upon and its almost certain that it won’t be the mechanical chariot shown in concept art.

– City Sieges will be instanced thus restricting the number of participants per instance. 75v75

– Raids. Mythic doesn’t believe in them.

Initial reaction: DANGIT! Appearance changes to show level progression was a feature I was really, really looking forward to because it sounds so practical. Jeff explained the system that they have all planned out including the option to accept the appearance change or not. He talked about dwarf beards growing and chaos eyes glowing and even mentioned that they have a spreadsheet with every change for every race done. But then said that it won’t make it into the game because it’s too much work. That’s a real bummer. I’m genuinely disappointed and hope that they’ll find time to add that to the game in the near future. I think that will add a lot of depth and contribute to the scope of Warhammer.

Jeff talks about how the mechanic chariot just didn’t look good. I can appreciate the need for things to look good. I just hope they don’t turn out to be rams or goats… you get where I’m going with this I trust. Games Workshop has a list of appropriate Dwarven mounts that Mythic will work with. Personally, I think gyrocopters would be great!

City sieges instancing themselves — I’m on the fence right now in that “looking around at everyone else in the room” phase. City sieges, because they will be such a big draw for players, will be restricted to 75v75 and that means that some people will be pushed into other instances. All the instances contribute to the victory pool and matter, but somehow it’s just not sitting well with me. I understand that this is needed to stop the server from imploding and I get the fact that WAR will be catering to a now much larger audience than DAOC did… but I hope that it’s capable of sustaining that feeling of immersion. It could go either way right now.

THANK YOU! I’ve been waiting for Mythic to finally say that they’re not trumpeting raiding in their game. There are other games that do that and that’s not what Warhammer is about. Warhammer is about the RvR campaign, and Jeff explains all of that in the Q/A video. WAR will have some great PvE though and Jeff goes into great detail about that including one of the specific dungeons, Keep Lords, and all that good stuff.Â  It just won’t require large amounts of people (except Keep Lords). Again, Thank you Mythic.

That’s all I’m going to talk about from this specific video. Watch it! It’s worth it.