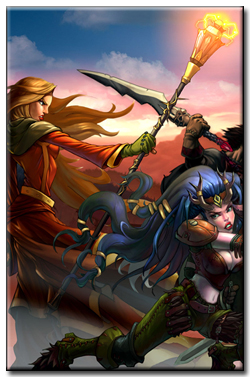 I’ve been in the Mythos closed beta for at least six months now and haven’t really thought much of it. Mythos has been in closed beta without a NDA since about October and you really can’t browse the web without tripping over someone’s thoughts, impressions, or beta key giveaways. As I said, I haven’t really thought much of Mythos because to me it’s always been ‘that game in the background’ that I want to try but can’t find the time or desire to pull myself away from my current escapades. Since I found myself once again bored in the wake of WAR’s delay and Conan’s NDA covered development I decided to reinstall Mythos and give it my first serious look. So watch your step, here come my thoughts on Mythos.

My very first impressions of Mythos were that the game felt polished and it had that “good” feeling which I can’t really begin to explain. The core elements of Mythos are nothing new and that becomes apparent within the first five minutes of play. The game is made by Flagship Studios (The guys behind Diablo) which explains why Mythos is a very familiar face. From the moment my character entered the world I was met with the infamous yellow exclamation point offering me a quest to enter an abbey-turned-dungeon where undead and other forms of cliche dungeon monsters now reside. While completing the quest to cleanse the foul beasts the game’s combat system and feel are immediately revealed. Again, it’s a familiar face. It plays identical to the “Diablo style” rpg but without the redundant and linear / overbearing stories these developers have been pushing lately. Tons of monsters – check. Mouse movement – check. Click on monster to execute attacks – check. Quests aplenty – check. It’s all there.

Where Mythos departs, ever so slightly, from the standard happens to be right when you leave the first area. The game is being labeled a mmorpg. The definition of mmorpg has become so skewed and shaped to really fit any game designed for people playing online together that I’ve given up trying to keep up — to some facebook is a mmog, come on now. To me it’s not a mmorpg. It’s like Guild Wars. Hate on me if you want but GW is not a mmorpg and neither is Mythos. They are highly instanced online persistent worlds. If you can manipulate terminology then so can I, hah! But I digress.

Essentially everyone is online together in the world whether or not they are in the same instance of said world. Towns act as hubs and like.. towns… where you craft, sell, pick up quests, meet other players, and… show off, I guess? Basically they are one of the few places in Mythos where you will actually see another player. From these towns you ‘travel’ to other destinations. During the travel, which consists of working your way down a path towards the zone line, you can see other players and share the mobs that spawn (from what I understand this is a new addition) — and that’s the limit of your chance encounter experiences in Mythos. Dungeons and specific quests are completely instanced for just you or your party.

The world is very cartoon-cute. You can’t help but smile at the Gremlin with a cigar in his mouth wielding a musket 3x his size or laugh at how none of the monsters look truly scary but instead look huggable. The world is very inviting, very immersive for what it is, and it brings with it a sense of adventure and fun. Dungeons are very big and inviting and there are plenty of them out there. I found a merchant in the very first town that wanted to sell me maps to locations of dungeons (their way of unlocking content) where loot is undoubtedly waiting to be discovered. The music in Mythos is one of the best things going for it. It’s definitely one of the few games where I don’t mind leaving the music volume up because it actually draws me in to the game even more.

Although the game only has 4 races (Cylcops, Gremlin, Satyr, and Human) and 3 classes (Gadgeteer, Bloodletter, and Pyromancer) it has a bit of depth in the skill tree customization. Each class has three trees with a surprising amount of skills. I definitely smell a distinct min/maxer approach just like in Diablo games where some of these skills are completely bogus and others are out of control uber. Nevertheless, the diversity is there. Continueing with that thought I want to talk about the weapons. The standard white – green – blue – purple – etc system that we’ve all grown accustom to makes an appearance in Mythos. From what I’ve been able to gather the system is quite deep with socketing and item’s stats can be random. My Dwarven cannon could have 80-110 damage and yours could have 89-112 as well as attribute stat fluctuation.

Flagships Studios plans to make money on Mythos by going with a RMT model. Did I mention Mythos will be completely free to download and play? Oops, that’s important. They are going to make their money by selling character appearance changes and a “second form of currency”. This second form of currency will allow players to purchase items that can benefit their character. I’m happy to have read however that they do not plan to allow anyone who spends money to be any more powerful than someone who plays for free — they’ll simply be capable of achieving uber status quicker. This second form of currency will also be tradeable with anyone once purchased from the RMT store. SOJ anyone?

So what else makes Mythis special? Glad you I asked. There are three modes (other than normal) of play that you can select for your character at creation:

Apparently more than 70% of the players are Elite mode which makes sense. More elite mobs = more chance for phat loot. I learned that PvP was just added to the game four days ago though so you might want to think twice about that Shadowlands only mode. Apparently the PvP is extremely unbalanced and full of portal campers. The PvP sounds like a real adrenaline rush since you lose items when you die. Kill players lower level than you and you’ll earn anarchy points which cause you to lose even more gear when you die. I haven’t played any PvP yet but from what I hear they have a long way to go before it’s truly playable. Toss the pvp balance issue into the hat of a few dozen other bugs and it’s apparent why the game is still in closed beta. But, these things can be fixed.

There is something special about Mythos. It has a certain charm that I can’t easily dismiss – as much as I would like to… honestly. I feel a lure to play even though the gameplay can be repetitive. I want my character to find really nice items and become super powerful. I want to explore all of the dungeons to guarantee I leave no stone unturned. Don’t ask me why, I just do. To me that means Flagship Studios is on the right track. Look for open beta sometime in the very near future. It’s definitely a tide-me-over but one with great potential and substance.