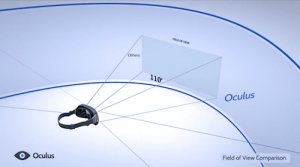 Have you seen the Oculus Rift?Â  It’s a VR headset being designed for gaming, currently being Kickstarted (insanely funded), hyped like crazy, and oozing with potential.

While an awesome idea for any kind of game (Minecraft, Assassin’s Creed), most of what Graev and I think about goes back to MMORPG’s.Â  You guys know us.Â  We’re always pining for immersion and the experience that feels more like we’re ‘living’ in the game than simply arcading.Â  While going over what we think about the Oculus Rift, we reminisced about the old days of EQ first-person and how everything was augmented by seeing through your character’s eyes.

Playing MMO’s *AS* your character, instead of just controlling a character, is such a different experience — one we think would be made even better by something like the Rift.Â  Imagine playing as an Asura in GW2 with the ability to be in first person looking around the world from that perspective. Instead of just using the mouse and keyboard to accomplish it you would actually move your head and look around.Â  Looking up at a tall mountain, performing a jump puzzle, or even trying to see past the zergs in WvW would be entirely different.

I could lose myself thinking of all the new and improved ways MMORPG’s and other games would be designed if the devs could take advantage of that field of view and perspective in a more immersive (and less restricting) way.Â  For this to work, games would certainly have to transition to more of a first-person experience.Â  Assassin’s Creed, for example, running across rooftops looking down as you run would be intense.

There has to be a next big step for gaming one day.Â  We started with keys, moved to controllers, and a few hundred years from now it might be Holodeck.Â  Maybe something like this will be somewhere in between.Â  I’m more than willing to try any new idea that comes along promising to improve my gaming experience — especially with immersion.Â  File this one under ‘cool’.

Catch a video of the Oculus Rift after the break. END_OF_DOCUMENT_TOKEN_TO_BE_REPLACED

We'll write more in Sunday's Adventure Log, but I want to hop on an give you all a quick update on where we're at with TSW.Â  I think we're both…

Keen: EverQuest This week's adventure log is all about the oldschool for me.Â  I spent the week writing about immersion in MMORPG's.Â  Modern games can't immerse me like the previous…

Yesterday I wrote about the lack of immersion I feel from contemporary MMORPG's.Â  I'm trying to work out whether I'm unable to be immersed because of the games, or incapable…

I wish that I could time travel back to the day Star Wars Galaxies launched.Â  Why SWG, you ask?Â  I guess it's because I was already a MMORPG veteran with…