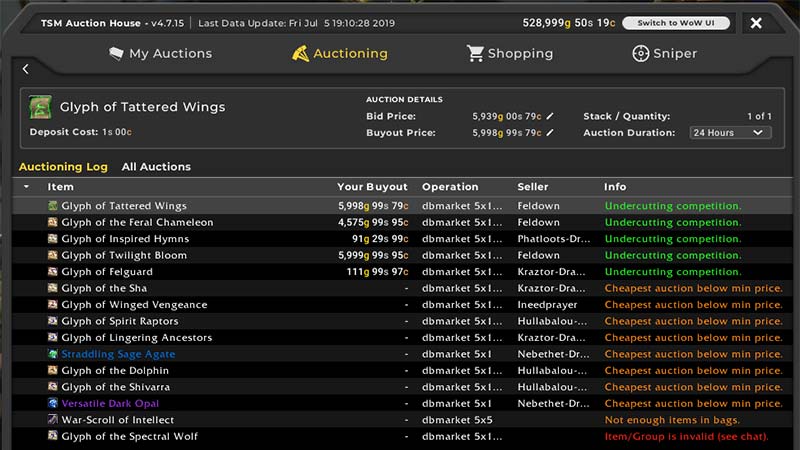 Only a few months ago I had just 100k gold. That gold took me (literally) a decade to accrue. If you asked me about making gold in WoW I would have told you that it was only doable by getting lucky, gaming the system, being a first mover, or taking advantage of some stupid system from a past expansion (like WoD's garrisons).

I decided that I wanted to challenge myself to see if I could pay for my subscription purely by playing the game. I knew it wouldn't be easy. I'm on a low-medium pop server, and I promised myself I would put NONE of my gold into the process. If I was going to make money, it wouldn't be through investments.

So I set off on this journey to pay for my token, and what resulted was 10x my goal. I made over a million gold in PROFIT in less than 30 days.

Here are the lessons I learned along the way.

Lesson 1: Exchanging Time for Money Works, but It's Not Fun

I started by farming A LOT. I put in several hours a day to grind mobs for skinning, gather herbs to sell, etc. I actually made a hefty chunk of change in the process. I started to bring in roughly 3-5k a day. I would find a spot to grind leather and sit there for 2 hours. If I was able to keep that up for 30 days straight, that alone would pay for my subscription.

But who wants to do that? Not me.

About a week into my serious attempt at making gold, I quickly learned that I was at a massive disadvantage by not using an auction addon. I had tried TSM in the past and it was suuuuper confusing, so I tried Auctionator instead. After a few days of Auctionator, I realized I was still missing some really important tools related to automatic price calculations and mass-posting my auctions.

I decided to give TSM another shot, and now I feel like a pro. It took me several days of watching tutorials, but I have made hundreds and hundreds of thousands of gold because of it.

I highly recommend the tutorials by Samadan Plays WoW. I've embedded them below.

Lesson 3: People are Stupid and Buy Stupid Stuff; Use the Data

One of the biggest lessons I had to learn when trying to make gold was to disregard my own preconceived ideas about what was "good" or "worth buying" or "valuable" and rely on the data. People buy things that I think would never, ever sell!

TSM has a lot of great ways to show you the sale rate, total number of an item sold daily, and all sorts of metrics right on the item tooltip.

You can also use a tool called the Undermine Journal that has a lot of historical data on what sells. There are lots of charts to reference.

Though truly an advantage over those who do not use these addons and resources, they're not "funair" or "cheating" or anything like that. YOu have to remember that these use WoW's own API. If Blizzard didn't want this data to be made available, then they'd shut off their API. It's there, so you might as well use it.

I was getting frustrated that I couldn't sell a lot of newer items, particularly those from Battle for Azeroth. I thought that people would only buy items in the latest expansion. Wrong!

I make at least 50% of my money selling items from previous expansions. In fact, Pandaria and Legion are both very lucrative expansions for me.

Every server will be different, so my advice is to study the market. Find areas where you see items selling for a good price that don't take you a lot of time to farm. You want the ability to scale your operation. For example, I discovered that Living Steel is still very lucrative on my server. I can buy the base ingredients and transmute them into Living Steel, then sell those bars for at least 1.5k profit. That's a simple market where I can scale infinitely. The same goes for Titanium Bars as well.

I quickly learned that how much you sell matters far more than how much you sell things for.  I was listing 5-10 things on the AH every day. These things for worth maybe 15k. I thought that if I made 15k from very little effort (niche market, scalable, etc) that I'd be set. What could go wrong?

I decided to max several professions and start listing as many items as I could reasonable make/post at scale. I maxed Alchemy, Mining, Herbalism, Inscription, Tailoring, Enchanting, and Jewelcrafting. Now here's what I regularly have on the AH:

At any given time I can easily have 60-100 items on the AH. Doing absolutely no farming work, I'm selling dozens of items I make or find while playing the game normally and I make roughly 15-50k a day.

I will often see people undercutting each other to the point where things are so low in price that I no longer find posting my items at that price worth it. In fact, on a regular basis if I were to just post my stuff where people have undercut the market I would LOSE money.

When it makes sense I will either buy up all the product on the AH and relist it all at a higher price, or I'll simply buy up a portion that's too low and relist it all a few coppers cheaper than the people selling it at a reasonable rate. This requires intimate knowledge of what truly has the velocity to sell quickly, and what's truly being sold at a submarket rate, but I've made at least 100k doing this strategy.

I'm sure there are dozens of better ways to make money in WoW, and I am by no means good at it. I've made mistakes (one the other day for 150k) and I've gotten lucky. Sometimes the market is about being the right seller for the right buy at just the right time. Two days ago I sold 3 trinkets each for 5k over the AH price simply by posting them in trade chat. Again, people are dumb.

If you're willing to put in maybe 30 minutes a day, learn how to use TSM, and find niche markets where you can be one of the main suppliers to that market, then you can easily make a million gold.

Don't let your server be a discouraging factor, either. I thought being on a low pop server meant I was doomed. Sure, things sell slower, but that also means there are niche markets ripe for domination without heavy competition.

I now consider myself a 'goblin'. Half of my enjoyment in WoW comes from earning money. I love it, and log on each day excited to see what has sold or what new opportunities are in the market.