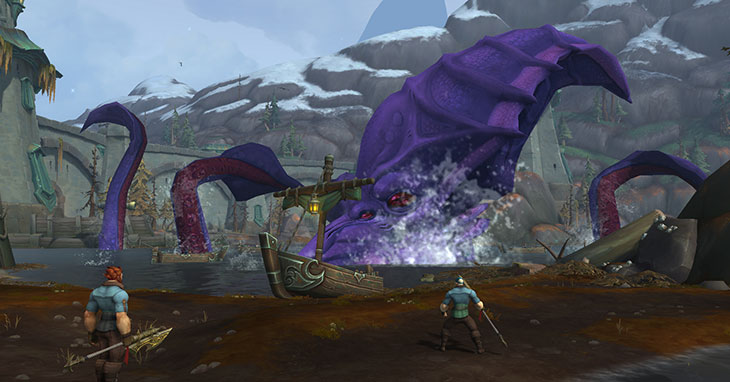 I really don't know where the past two days have gone. Ever since 3pm yesterday I've been playing Battle for Azeroth (minus work and RL obligations, of course... I'm not into the whole "let's play for 24 hours straight" thing anymore).

I'm level 117 now, and so far I've completed all of Tiragarde Sound and all but one final area in Drustvar -- those are Alliance questing zones.

There are some incredibly good quest lines in these two zones. There are also quite a few of those 'filler' quests that just keep you going through the motions in a manic-like state, but every once in a while a real good story quest hits you in the face.

So far Boralus city is the high point of my adventuring. This is the first WoW city that feels like it's really sprawling. There's something lively about it. I think that's true for a lot of the zones and areas in BFA. Everything is spread out and made in such a way that it feels believably real enough.

I'm feeling a lot of WotLK in this expansion. The vibes from the music, the zones, the quests, etc., have been really resonating the same way WotLK leveling did with me. I think that's a good thing. Legion wasn't bad at all, but so far I like BFA more.

I'm probably 10 hours into questing and only level 117. I have no idea how those guys have done it in 4 hours. I'm reading/watching/listening to what I can. I skip some of the side quest stuff that's just kill x bad guys, but for the most part I've been taking it all in. I'll hit 120 tomorrow I imagine, and from there I'll run some dungeons and start seeing the "end-game" as we know it now.