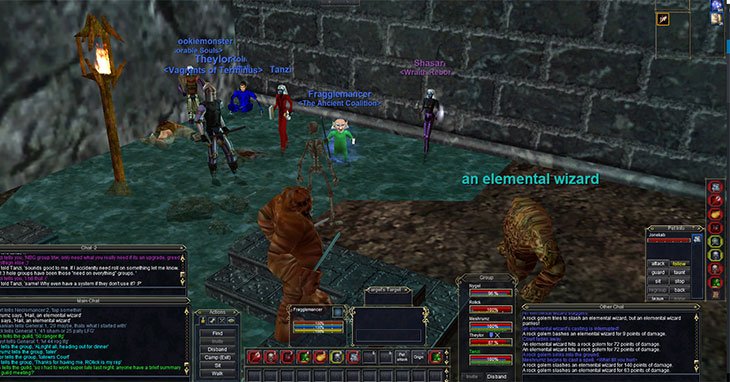 Here's a great question for you guys.

Who should pull mobs for the group if there is no dedicated pulling class - Crowd Control, DPS with aggro drop ability (Smoke bomb, FD etc.), the main tank or another option?

First, I have to stop and appreciate for just a minute how awesome a game is when there are actually pulling classes.

For a pulling class to exist, that means there must first be a mechanic which requires a group to sit back and brings mobs to it rather than faceroll through everything or 'play through' content.

Then you have to actually have a class with uniquely designed abilities that aren't homogenized across all of the other classes and "core" archetypes like healer, tank, and dps. When there's a puller class, there's also typically a CC class and a support class that isn't a healer, and chances are class variety and role filling is quite varied too.

Now to the question.

If there's one available, I prefer a highly-skilled crowd control class. In EverQuest, that typically meant Enchanter or Bard (the latter could arguably be called a "dedicated pulling class" I suppose). If the mana battery and flutist aren't very skilled, that can often lead to bigger problems and they should just sit back and support the group.

Barring the CC class, I'd opt for a tank to pull. The tank needs the aggro anyway, and a good tank who knows the layout of the area can save a lot of time by just pulling up everything from the start and allowing the CC class to peel them off.

My last option would be the DPS class. I've only met a few who don't become immediate sponges when pulling. As someone who has healed a great deal in the old school MMO days, I weep after meditating my mana bar back up for 5 minutes just to watch it all go to the DPS class in one pull.