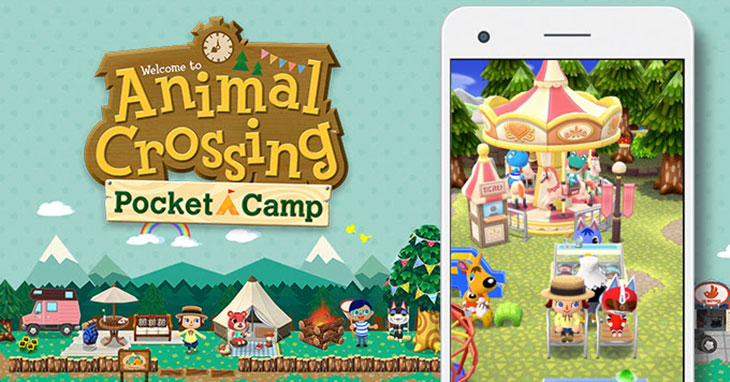 Animal Crossing Pocket Camp is out for iOS and Android today — well, technically yesterday. For some reason it came out a day early.

I have already been asked by friends and family, “what is Animal Crossing?” I guess it’s harder to explain than I thought because I didn’t have a really good answer to give right away. Contemplating the series, I came up with the following. Animal Crossing is about three things: Collecting, decorating (or expressing yourself), and real-time open-ended gameplay.

In all of the games, you’re a human character who has come to a town (or in this case a camp) as the new resident. You get your own house (or camp site) to decorate and call home, and then spend your time building relationships with the other residents who are all anthropomorphic animal people.

The game ultimately boils down to collecting, fishing, or catching things to trade, sell (for Bells, the in-game currency), and give to NPCs. You use those bells, and in this case items you get for trading to other creatures, to make items or buy items you’ll use to decorate your camp. Decorating is a big component of the game, so if you’re anti-Sims and can’t stand the idea of putting up fences, laying carpets, setting up a couch, tweaking that lamp so it looks just right… then this is most definitely not the game for you.

A big part of Animal Crossing for me has always been accumulating wealth. I like to fish, shake trees for fruit, catch rare bugs, and ultimately become uber wealthy and have everything.

For the first time, Animal Crossing is free and works microtransactions into the game. It also introduces a non-contiguous world, whereas the game has typically been about running around to visit all of your neighbors in more of a Star Dew Valley type setting.

I don’t love driving (clicking a spot on a map and loading into that small location) as much as I like the open areas of past games. I’m also not a fan of how small the little areas feel to me. I like the “world” or playable area being a bit larger, and in Pocket Camp it’s just not.

Microtransactions are right at home in Animal Crossing due to its real-time gameplay. There has always been a real time element in Animal Crossing because of its use of the system clock, so naturally making you wait for things or lettting you spend “Leaf Tickets” to speed things up just makes sense. I don’t love it, but I would expect nothing less from Tom Nook.

I’m playing on my iPhone X, and the game is gorgeous looking and already very optimized for the device. I played for about an hour straight and my battery did not make any noticeable dip.

In general, it’s all still too early to say just how nefarious the microtransactions are in the game. Clearly we know they’ll stand in your way of having everything, but to what degree I don’t know.Â  I’ll post an update if I become disenchanted with the whole process.