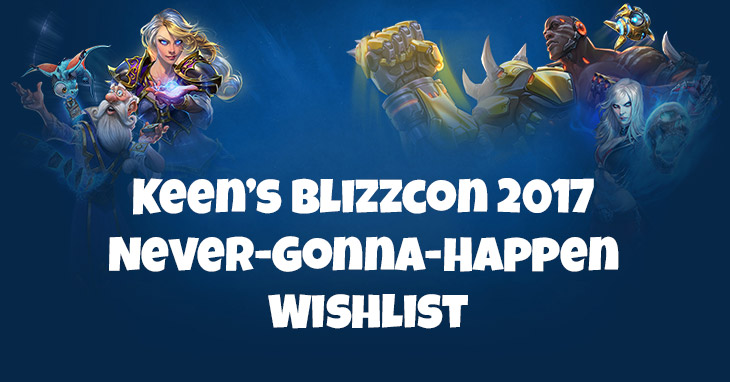 It’s that time of year again! It’s Blizzcon eve, and I’m going to make a few wishes upon a star and hope they come true.

Here’s what I really hope we see this weekend from Blizzard.

I really want to see this become a reality. Technically, I think they’ll do an HD remastered version of Warcraft 3 and Frozen Throne before we ever see a new Warcraft game, but that’s a mistake in my opinion.

A new RTS game would be a huge hit for Blizzard, and surely a success. Blizzard could use the Starcraft engine and no one would even care. I will never stop wishing for Warcraft 4 to be announced at Blizzcon.

Probably the most absurd of all my wishes is that of a new MMO (which we wouldn’t see until 2025). Diablo, Starcraft, Overwatch, or new IP. I don’t care. I’d like something new in the MMO space. I think Blizzard may even be the only company capable of figuring out how to launch a F2P MMO and succeed without the game being complete garbage. I’m not saying I want it to be F2P — quite the opposite — but I think they could experiment and succeed.

I think it would be awesome if Blizzard took the Overwatch PvE gameplay to a new level and created a PvE campaign or some sort of PvE mode of sorts. I’d settle for a horde mode that stays all year long with lots of maps and features that really build up the PvE gameplay.

I’d like to see an action adventure game in the same vein as something made by Naughty Dog’s Uncharted series. I think the Diablo property could possibly lend itself to something like this, or even the Warcraft property. Something single-player with a story.

Okay, so maybe not Lord of the Clans, but I’d love a Warcraft adventure game. Something point and click all about story. A retro throwback with humor, easter eggs, and lots of Blizzard class.

Not More of the Same

I’d be perfectly fine if we didn’t see a WoW expansion, Overwatch Hero/expansion/map, Hearthstone expansion(s), Diablo 3 season announcement, Heroes of the Storm hero, or Starcraft DLC announcement. Anything but more of the same would be a wish come true. I’m not saying it’s bad — no, it’s all quite good. I just want something new and mind-blowing to come out of Blizzcon this year.

Okay, those are my wishlist items! They’re absurd, and I’d be in complete shock if any of them were to ever come true. What are your Blizzcon hopes and dreams?