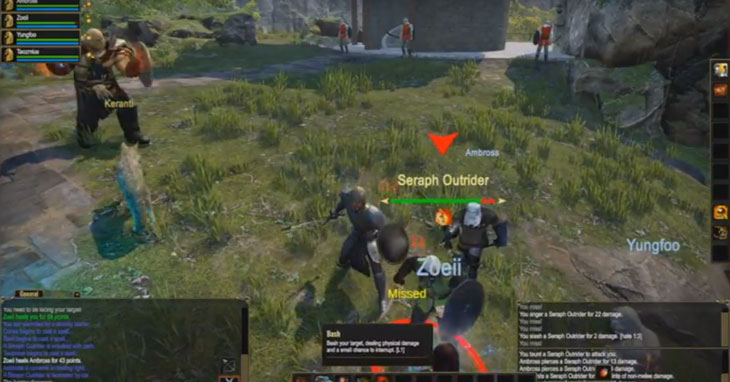 Pantheon has reserved a special place on my "MMOs to watch and be excited about" list because it's trying to hearken back to an era where MMOs were based on a world of challenge and teamwork.

So as the years go by, my interest grows as Visionary Realms continues to show more and more gameplay.

Obviously what they showed was early, and the hiccups/issues were present. They're going fairly indie on this one, and it shows, but that's okay. There's a lot to glean from some of the ideology they're expressing.

I took away several key points from this presentation that I want to share with you.

This is hard to define clearly, but it has to do with the idea that the game and the world evolve beyond more than just the repetitive tasks of killing monsters and clearing a dungeon for an in-game defined objective.

MMOs were once about forming the community and the bonds of friendship for no other reason than having virtual friends or to live and fill a role in a virtual world. That's the glue that makes these games often 'sticky' and something we want to continue to log in to each and every day -- or even 17 years later.

How Pantheon looks to create that feeling again... I don't really know that Brad answered that clearly beyond having a game that will be challenging and require teamwork. To me, it's not something that one can clearly check the boxes required and then have a sticky game. I thought this was really cool. Instead of there being invisible barriers or simply quest objectives locking your progress, your character will actually go up against the environment. This is definitely a nice play on the "player vs. environment" angle of PvE.

For example, during the presentation we saw that a snowy area will require cold resist gear. I hope there will be fire, poison, and other area making environment a real factor in "PvE."

Most games -- probably all these days -- tend to have a "this is the best sword at level 20." Pantheon is striving to have a system where gear is more situational. One sword might excel in one area but not in another. I believe this system will expand to other armor and weapon combinations.

When asked whether raids will be the typical fair, the Visionary Realms team responded by saying yes, but with more twist. In previous games like EQ you could bring 40 people to a 20-man raid. In Pantheon you can still do that, but if you bring an overwhelming number of players the encounter is going to react -- the monster might run away or call reinforcements. This matters a lot more than people give credit. To have an open world vs. instances means we're all playing together. Your group doesn't get an instance to itself. This means a zone isn't "completed" or "reset". An open-world provides much more "live in it" and "survive it" gameplay.

Pre-alpha Begins Before the Holidays